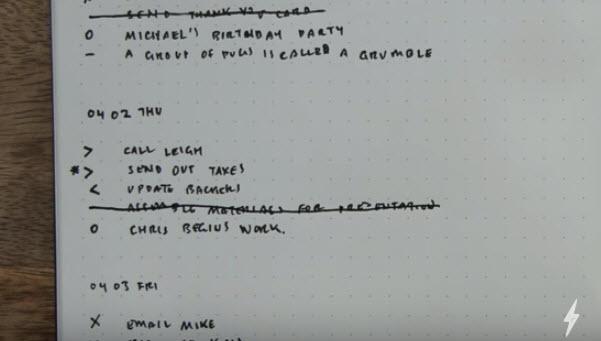 NPD notes that “bullet journaling” is helping to fuel an uptick in sales of traditional paper notebooks and writing tools.

The NPD report is also likely to spark a jump in the number of people googling the phrase “bullet journaling.”

Here’s the scoop, from the horse’s mouth: “The Bullet Journal is a customizable and forgiving organization system,” explains BulletJournal.com. “It can be your to-do list, sketchbook, notebook, and diary, but most likely, it will be all of the above. It will teach you to do more with less.”

In one manifestation, bullet journaling teaches a user how to plan ahead, using symbols like dashes and dots, carat marks, x marks and bullet points next to items to signal that these are events or tasks that are upcoming, being put off until later, eliminated and so on. It’s kind of a to-do list on Red Bull.

On a marketing level, NPD says, “Over the past year, U.S. consumers have spent nearly $210 million at retail for unruled spiral, composition, graphing and other notebooks — an 18%  increase in sales over the prior year. Select writing instruments commonly used for [bullet journaling] have also seen growth, including color markers (+17%); paint markers (+9%); permanent markers (+6%); gel pens (+6%); and porous pens (+5%),” as measured by the NPD Group/ Retail Tracking Service.

The Bullet Journal system is explained in detail on its website and in a series of YouTube videos.

An introductory YouTube video has garnered more than 8 million views since 2015 and is part of a series of instructions by Bullet Journal creator Ryder Carroll, who calls it “an analog system for the digital age.” He sells a customizable journal, but also encourages others to create their own.

Doing it just right seems to matter. Keeping the journal seems to be easier than explaining it.

On BuzzFeed, the author of “WTF Is A Bullet Journal And Why Should You Start One” really got into it: “For my first journal, I bought a Moleskine with a dotted grid;  the dots mean it's very flexible for different layouts, which I love. When I started my second journal, I tried a Leuchtturm dot grid journal; it comes with the page numbers already on it and has a blank index ready for you (more on what the hell that is in a moment). I switched to that for my second bullet journal and really like that one, too.”

Two-thirds of those who engage in bullet journaling are women, and they also account for most of the two million Instagram posts that contain the hashtag #bulletjournal, according to NPD’s Checkout service.

Indeed, website The Petite Planner touts “11 Game Changing Bullet Journal Supplies Under $10.” It begins with this introduction from Erin, the keeper of site, who says the items “will make your bullet journal prettier in a lot less time.”

The Bullet Journal is one in a list of activities that NPD sees on the increase as some consumers try to escape from the clutches of technology and back to something simpler—even if, as in this case, it sounds kind of complicated.

“Aside from bullet journaling and hand lettering, there are other activities trending in creative expression, and they are largely being driven by younger consumers,” says Tia Frapolli, president of NPD’S Office Supplies practice, in an email exchange with Marketing Daily. “In our data, we’re seeing growth in canvases and acrylic paint sales, driven by the popularity of wine and paint parties. Also, [growth in] DIY home décor [items among] young adults and college students. Gel pen sales are growing, which is definitely driven in part by bullet journaling. But it also plays into the ‘digital detoxing’ trend — consumers desiring a break from constant digital interface and enjoying using traditional products to destress.”