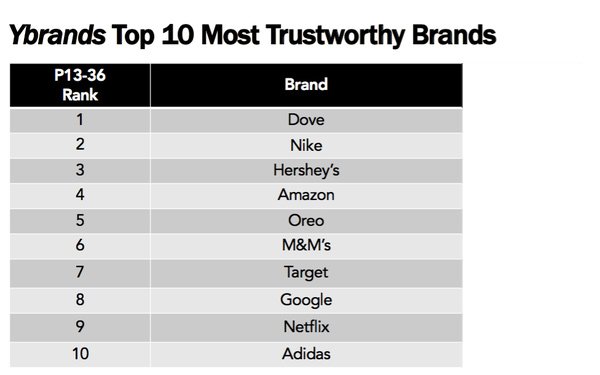 Dove, Nike and Hershey’s take the top three spots in “most trustworthy” brands among consumers ages 13-36, per Ybrands.

Rounding out the top 10 are Amazon, Oreo, M&Ms, Target, Google, Netflix and Adidas.

The list is an “interesting mix in that, I think, young people ascribe trustworthiness to a brand for a variety of subjective reasons,” says Bobby Calise, Ypulse’s vice president of Ybrands, its youth brand tracking product.

“Dove, for example, has built its reputation around its ‘Real Beauty’ campaigns, which comes through in its trustworthy ranking,” Calise tells Marketing Daily. “Meanwhile, young people may trust brands like Hershey's, Oreo, and M&M's because they've consistently made products they love for a long time — and there's no reason not to trust them.”

Megabrands like Amazon, Target, Google, and Netflix are so ubiquitous and popular that young people innately trust them, he says.

The company also focused on fashion brands, looking at what consumers deemed “coolest” as well as “most trustworthy.”  There was some overlap.

Nike ranked tops in both categories while Nike’s Jordan brand was second in coolest but fell to 8th in most authentic, where Levi’s took the second spot. Adidas ranked third, Vans ranked fourth and Under Armour ranked fifth on both lists.

“Nike is kind of like the Beatles or the Beyonce brands in that they've achieved both critical and commercial success, especially when it comes to the youth market,” Calise says. “No matter how we slice the data — by age, gender, ethnicity, region — Nike tops the list of the coolest fashion brands among Millennials and Gen Z. Nike also owns two of the other top 10 coolest brands, Jordan and Converse.”

Supreme's ranking as the #8 coolest fashion brand is driven by its popularity among 18-24-year-olds (#5 among this demo), as streetwear has become more prevalent, Calise says.

Levi's falls just outside the top 10 on “cool” but is the second-most authentic fashion brand, he notes.

“After 165 years in business — and perhaps because of that long history — Levi’s is still perceived among teens, 20- and 30-somethings as true to itself,” Carlise says. “Even Nike could learn something from Levi's when it comes to authenticity.”