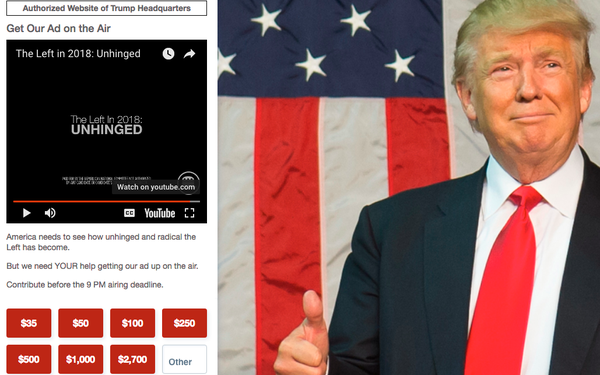 In a direct appeal to crowd-fund a paid media buy to distribute a video attacking liberals as “unhinged,” the Trump-Pence campaign this morning sent emails to its list asking for “another $1OO,OOO before tonight’s 9 P.M. airing deadline.”

The appeal does not explain the use of the proceeds or why there is a deadline associated with the ad, a greatest-hits sizzle reel featuring the most egregious attacks on Trump and his policies. It asks the list to “please watch the ad and you can decide for yourself if it’s worth it for all of America to see this.”

How the additional $100,000 in fund raising would help all of America see it, isn’t clear, because the video is already live on YouTube. Also, the ad itself ends with a disclaimer noting it was “paid for by the Republican National Committee” and was not “authorized by any candidate or candidate’s committee www.gop.com.”

The video (embedded below) begins with a voiceover of Bernie Sanders with the image of graffiti saying “Revolution or Death,” then cuts to:

* a voiceover of Nancy Pelosi