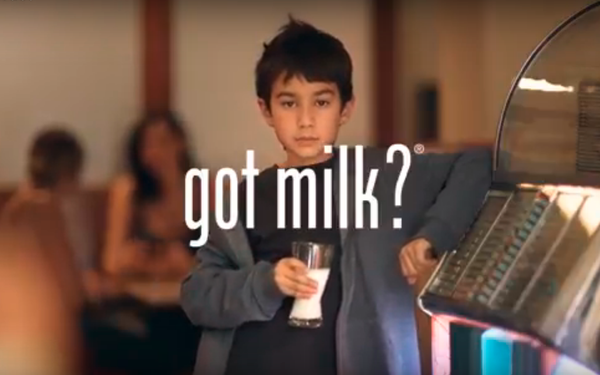 Gallegos United is introducing its first work as lead agency for the California Milk Processor Board (CMPB) after winning the account from Goodby, Silverstein & Partners — creators of “got milk?” GS&P had the assignment for nearly 25 years.

Gallegos has been on CMPB’s agency roster for the last 12 years, most of that time overseeing Hispanic marketing efforts. The agency won the consolidated creative assignment last December.

The new campaign is called "You Can Always Count on Milk." The creative is notable for its lack of demographic checkpoints. Both the agency and CMPB realized this account makeover needed to reflect that today's market doesn't need demographic silos in order to be "culturally attuned," says John Gallegos, founder, Gallegos United.

It is almost offensive, Gallegos says, that once upon a time, multicultural advertising simply meant the creative is first developed in English to later translate across other ethnicities or races. It was as if ”Got Milk” transformed into ”Toma Leche” was the height of cultural creativity.

Now, the creative entry points are the kids themselves, says Gallegos. "Kids drive consumption," he says, adding that shifting away from directly addressing Millennial parents to show everyday tweens ensures the message resonates with all decision-makers, whether they are two dads, single parents, or multi-cultural. There are universal truths among kids, like having conversations about allowances that work broadly.

A "complex market like California, where you have to take into account everything from demographics and technology to the media landscape and consumer lifestyle, poses a unique set of challenges," stated Stephen James, executive director, CMPB. Still, both the agency and client understand they are up against some tough challenges, particularly lower milk consumption that isn't likely to revert back to levels seen in the ’80s or ’90s.

"The landscape is different," says Gallegos. "We have penetration; we just need to tick it up a bit."

Although TV will remain a key media buy, the campaign will "get outside" of the traditional media plan to instead "set up a conversation," says Gallegos. This means the campaign will run across online video, social media, retail point-of-sale, mobile push notifications, and, for the first time, search engine buys to link up with parents seeking questions like "how much milk can I serve my child?" or "is milk healthy for me?"

"We are playing in the world of information overload so we want to be at those places when they are seeking trust-worthy information," says Gallegos.

While the work is new, one thing remains the same. The iconic “Got Milk?” tagline will continue to be placed at the end of the ads due to its "strong brand equity.”

Measuring success is relatively straight-forward, says James: “Does it increase milk sales? With advertising, unless you are affecting behaviors, you're wasting time and money."