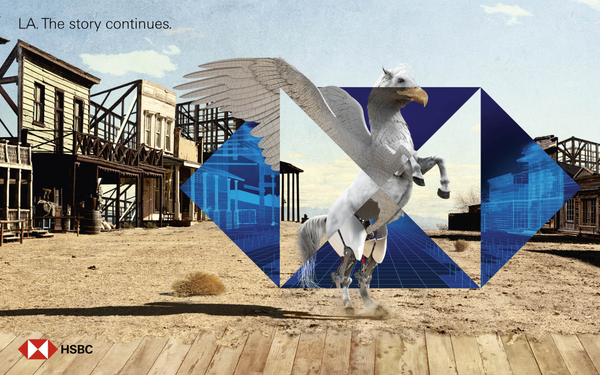 HSBC is launching a global airport campaign that the financial services company says is one of the world’s largest out-of-home advertising campaigns.

The campaign will appear in five languages at 17 airports in nine countries. Featuring 79 versions of HSBC’s hexagon, the imagery will cover more than 58 miles of passenger walkways. The strategy and campaign was developed by Saatchi & Saatchi and utilizes the new brand identity developed with Turner Duckworth.

Stories of prosperity from across the globe will greet more than 900 million passengers traveling through the busiest airports this summer. The company is overhauling its iconic airport advertising for the first time in three years. HSBC has been advertising in the world’s leading airports since 2001. A film shows the evolution of the campaign.

With new creative featuring both global and local images, the campaign brings to life the bank’s role in connecting the world and helping customers and communities thrive. Each image uses the hexagon as a window into a thriving world, with local scenes bespoke to the cities and countries that HSBC serves. From an initial longlist of 300 images, the hexagon visuals were chosen to reflect HSBC’s business priorities including trade, education, diversity and inclusion and sustainability.

“Our airport campaigns have caught the attention of millions of travelers across the world over the years and remind our customers that we are there to share their journeys with them,” Cutts says. “With global air traffic forecast to double to 14 billion passengers per year by 2029, airports will continue to be a pivotal part of our marketing strategy.”

Airports are one of the only spaces where footfall is actually growing, and by a significant margin, she says. Air traffic is forecast to double to 14 billion people by 2029.

“We have been rolling out our new brand promise of ‘Together we thrive’ and airports are a really important place to land that,” Cutts tells Marketing Daily. “It’s the first time we have changed the creative in all the airports at the same time, and it has had its challenges, but it was important to make an impact and ensure consistency of message when people are traveling from country to country.”

Materials for the airport creative have been specially selected to be capable of enduring jet blast from aircraft engines, as well as the most extreme weather conditions — from a special adhesive used in Dubai to prevent artwork falling off walls in extreme heat, to a covering applied in Canada to stop materials from freezing and cracking in winter.

“A good marketing strategy reaches its target audience many times with the same message,” Cutts says. “OOH is a key part of our strategy for reaching customers and potential customers in different environments, and is one of many ways we do this. ‘Together we thrive’ will appear across the bank and everywhere we have a presence, from airports to apps to stadium screens.”