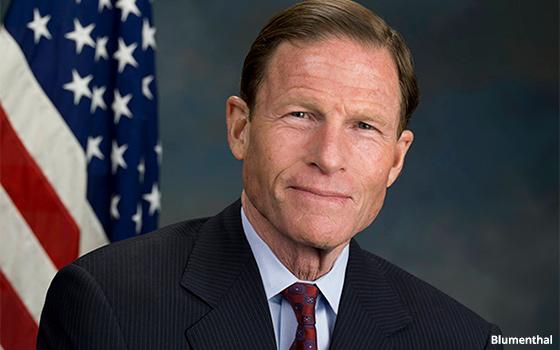 The EU's decision to fine Google $5.1 billion over alleged antitrust violations should spur the Federal Trade Commission to conduct a new probe of the company, a Democratic lawmaker said Wednesday.

"Google has been repeatedly caught abusing its dominance," Sen. Richard Blumenthal (D-Conn.) said on Twitter soon after the EU fined Google $5 billion. "This fine should be a wake-up call to the @FTC -- I’m requesting a meticulous investigation into @Google for antitrust violations."

European regulators said Wednesday that Google violated EU antitrust laws by requiring Android manufacturers to configure smartphones and tablets in ways that favor other Google services, including the Chrome browser and search engine. For instance, the company requires manufacturers to install Chrome, and to make Google the default search engine.

Consumers are able to change the defaults, and to download competing apps. But EU regulators still found that Google's bundling requirements are illegal under European law.

"Google has used Android as a vehicle to cement the dominance of its search engine. These practices have denied rivals the chance to innovate and compete on the merits," EU regulator Margrethe Vestager stated Wednesday.

In the U.S., Google's critics have long questioned whether the company violates antitrust laws. Blumenthal previously requested an FTC investigation into whether Google was "manipulating" search results in ways that harmed competitors. That request, like the one Blumenthal issued Wednesday, came soon after European regulators fined Google for alleged antitrust violations.

"The most pressing issue is the growing power Google and Facebook exert over the online platforms where people exchange news and ideas," the organizations wrote. "These corporations have also acquired vast amounts of personal data with little regard for its possible misuse."

Earlier this decade, the FTC investigated whether Google violated antitrust law by promoting its own services in the search results, but closed the probe without bringing charges. Former Chairman Jon Leibowitz said in early 2013 that the agency found that Google's primary reason for touting its own offerings in the search results was "to improve the user experience," as opposed to harming potential competitors.