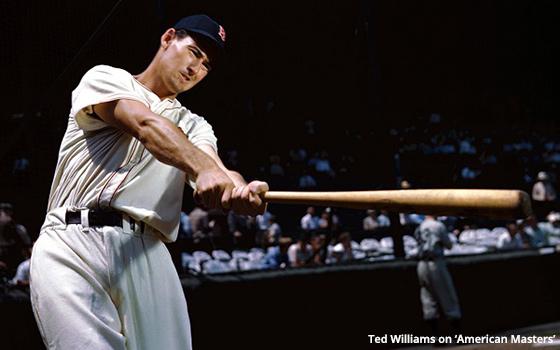 The new “American Masters” profile of Ted Williams on PBS might be more rewarding if the assignment of explaining Williams’ prowess as a baseball hitter had been given to a science show like “Nova,” for example.

Williams even wrote a book (co-authored with John Underwood) called “The Science of Hitting.” First published in 1970, the book is still in print, widely read and considered by many to be the definitive bible of baseball hitting.

The book is mentioned in the “American Masters” documentary -- subtitled “Ted Williams: The Greatest Hitter Who Ever Lived” -- but the real nuts and bolts of how Williams earned this “greatest hitter” title are not examined quite deeply enough.

The show hints at the reasons, though. The documentary makes the point that he worked very hard at it from a relatively young age. He even set a personal goal of being the greatest hitter in the history of baseball.

But the “science” of how Williams’ bat made contact so frequently with a baseball hurtling toward him at 90-plus miles an hour is not explained sufficiently, so that we who have never stood in a batter’s box can understand it.

The other particulars of Williams’ career and life, however, are well told in a documentary that may be flawed, but still worth watching on a Monday night in midsummer.

The Williams that emerges in the film was temperamental and taciturn. He clashed with sports reporters, seemed to have a love-hate relationship with fans (he spent his entire career with the Boston Red Sox), was unfaithful to his wives and withheld affection from his children.

This achievement forms the foundation of Williams’ designation as “the greatest hitter who ever lived.” Let the record show, however, that his lifetime average was .344. Ty Cobb’s was the highest in baseball history: .366.

In addition, Williams ranks 77th on the list of players with the most hits in their careers. He had 2,654. Pete Rose tops that list with 4,256 hits.

Williams remained active in baseball off-and-on as a coach, and also pursued a lifelong interest in fishing. After he died in 2002 at the age of 83, two of his surviving children had his body cryonically frozen in the hope that someday he might be revived and live again.

This made headlines at the time, since it may or may not have been done in accordance with his wishes. It is dealt with matter-of-factly here, although not fully explained.

In the end, Williams remains something of an enigma -- in life and in death.