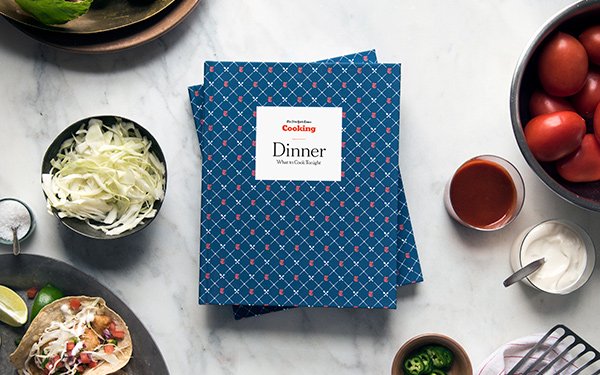 The New York Times is debuting a customizable cookbook, where consumers can pick and choose recipes from its popular NYT Cooking membership product to create their own personalized book.

“A physical cookbook offers us a beautiful, tactile new way for readers to interact with our vast collection of recipes, while also allowing us to experiment with new revenue opportunities as we scale the NYT Cooking brand,” stated Amanda Rottier, vice president of NYT Cooking.

The New York Times Company has had success with its Cooking product. The company added 139,000 digital-only subscribers in the first quarter, a 25.5% increase from the same quarter last year. About 40,000 of those new subscribers were from digital membership products, like its Cooking and Crossword channels.

The Times' cookbook offering has a similar concept to BuzzFeed's customized cookbook, born from its viral cooking vertical Tasty. The Tasty cookbook sold more than 100,000 copies in its first two months.

Chapters range from themes like “Takeout at Home,” “Dinner Party,” and “One-Pot Meals.” There are also options for specific foods and dishes, such as “Quick Chicken" and “Vegetable Sides.”

Each chapter contains eight popular Times recipes in that category. The Times says this gives readers nearly 350,000 potential combinations for their cookbook.

The book is available in The New York Times Store, its ecommerce shop. Like the Times’ cookbook, Tasty is only available on BuzzFeed’s own website. The on-demand, made-to-order printing process means Tasty — and likely the Times — does not waste resources on printing thousands of uniform copies at once. BuzzFeed also produced a cooktop and a kitchen gadget line from its Tasty vertical.

The NYT Cooking cookbook costs $35 for the Soft Cover version and $55 for the Hard Cover version. Times subscribers receive a 15% discount.

The Times’ store has a range of books users can customize, from books created with Times front pages for each birthday, to specific cultural topics that receive personalized covers. This is its first personalized cookbook.