'Give A Sip' Campaign Targets Plastic Straw Usage In NYC 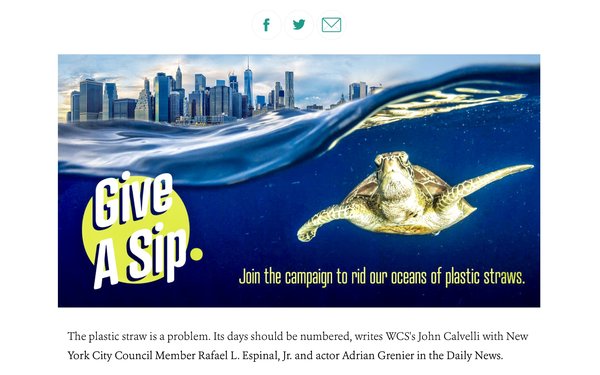 In partnership with the Yemini American Merchants Association, which operates more than 4,000 bodegas in the city, the “Give a Sip Dot NYC” campaign includes posters, wild postings and in-store signage to raise awareness about the environmental harm caused by plastic straws.

The creative targets bodega customers. Those who opt out of taking a plastic straw and who also sign a WCS petition receive a free WCS-branded scratch-off card (similar to a lottery card) with special savings for The Bronx Zoo.

Bodega owners are asked to keep petition records and will be given special rewards based upon participation level.

The campaign also includes signage at restaurants and bars as well as transit OOH, social media and a promotion around the ubiquitous Shark Week (July 22-30).

The campaign ends in mid-September to coincide with the city voting in October to approve legislation that would officially ban plastic straws.