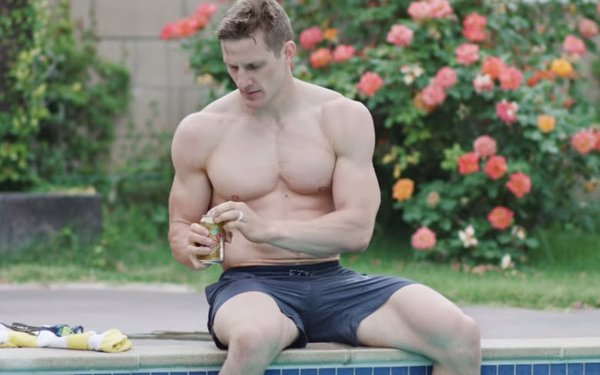 Zevia will run its first television campaign leading up to and during the 2018 CrossFit Games championships, set for Aug. 1 to 5 in Madison, Wisc.

The zero-calorie, stevia-sweetened beverages company will air two 30-second, in-house-produced spots during coverage of the games, which are sponsored by Reebok, on CBS Sports and local CBS stations.

The ads feature two of CrossFit’s leading competitors, who are Zevia brand reps: Katrin Davidsdottir (TV ad below), who won the women’s championship in both 2015 and 2016; and Brent Fikowski (above), who won second place in the men’s championships in 2017. (They are going into this year’s finals seeded #1 and #3, respectively.)

The athletes are shown drinking Zevia’s sodas, sparkling waters and energy drinks during workouts and their personal time.

Why is Zevia — which has up to this point focused its marketing on ambassador relationships, influencers, and digital and social media — trying TV at this stage?

“CrossFit is an ideal partner for us, as they’ve been vocally against sugary beverages and their effects on overall health — which directly aligns with Zevia’s mission of sugar reduction,” Zevia CEO Paddy Spence tells Marketing Daily.

“We thought the timing for this campaign provided a meaningful opportunity to promote our relationship with the CrossFit Games, which is now in its third year, and show how Zevia complements the lives of [Davidsdottir and Fikowski] during their training, without fear of disrupting their nutrition regimen.”

In addition, Zevia is gearing up to introduce a line of organic, ready-to-drink zero-calorie teas in October, he notes. “We’re growing rapidly, and this is a nice moment to offer a positive message to introduce our brand to an audience immersed in fitness.”

Asked about plans for using television going forward, the CEO said that Zevia is “always willing to explore the possibilities of TV to support further brand messaging and new product messages.”

L.A.-based Zevia also recently launched a five-year promotional partnership with The Hollywood Bowl — the first of several partnerships being developed with upscale foodservice venues that tend to attract consumers of “better-for-you” beverages.

As for growth, sales of Zevia, which was launched in 2007 and acquired by Spence in 2010, are now north of $200 million, according to the CEO. As of late June this year, the company had seen 50%-plus year-over-year sales growth in the latest 12-week period, he told Food Navigator.

The brand is in 40,000 stores, has 90% of the natural zero-calorie market, and is the 12th-ranked diet soda brand in the mainstream retail food channel, according to the company.

And its U.S. online soda sales were second only to Coca-Cola’s for the year ended this past February, according to a report from 1010data.

Spence told Food Navigator that Zevia’s growth prospects are more significant today than he ever imagined. “We’d love to be a $30-billion market cap public company,” he said. “We see the success of Monster, and it shows you what can be done. These guys can beat Coke and Pepsi at their own game, stay independent, be public and frankly have a market cap that rivals the biggest companies.”