Sinclair Broadcast Group and Tribune Media have been hit with at least three separate antitrust suits for allegedly conspiring to set the price of TV ads.

The companies "effectuated their scheme by having members of their advertising sales teams share competitively sensitive information and data with each other, which they used to raise advertising prices to levels higher than they otherwise would have been," Randall Ford, an attorney who operates the Ford Firm, alleges in a class-action complaint filed Thursday in U.S. District Court for Maryland.

Ford, based in Tuscaloosa, Alabama, says in his complaint that he purchased TV ads from a marketing consultant at Sinclair. The other two lawsuits were also brought by lawyers who say they purchased TV ads: Peter Miller, based in Little Rock, Arkansas, and Clay, Massey & Associates, based in Mobile, Alabama. Miller filed a class-action complaint in federal court in Maryland, while Clay Massey brought a class-action complaint in the Northern District of Illinois. Clay Massey's complaint also names Gray Television, Hearst Communications, Nexstar Media Group and Tegna as defendants.

All three suits came soon within a week of The Wall Street Journal'sreport that the Department of Justice is investigating possible collusion between Sinclair and Tribune. Officials who were reviewing Sinclair's proposed $3.9 billion merger with Tribune reportedly uncovered evidence that ad sales representatives at the companies had discussed performance issues, according to the Journal. The DOJ has not brought antitrust charges against Sinclair or Tribune.

The Federal Communications Commission recently moved to prevent Sinclair's merger with Tribune by referring the deal to an administrative law judge for review.

Ford's complaint alleges that the TV industry was "ripe for collusion" and that Sinclair and Tribune had both the opportunity and motive to collude.

"Even without an approved merger, defendants’ conspiracy allowed them to jointly control advertisers’ ability to reach more than 80 percent of U.S. households and to use this control to stifle competition," Ford alleges. From at least 2016 forward, Defendants used their combined reach to conspire to charge supracompetitive prices for television advertising."

He adds that the alleged collusion was at least partially driven by increased competition from tech platforms.

"Faced with the reality that they would not be able to maintain and increase their profits through mergers and acquisitions alone and staring down increasing competition for advertising dollars from digital platforms like Facebook and Google, which remain crucial to broadcast television owners’ financial success, Defendants and their co-conspirators sought to increase profits by raising television advertising prices through price-fixing," the suit says. 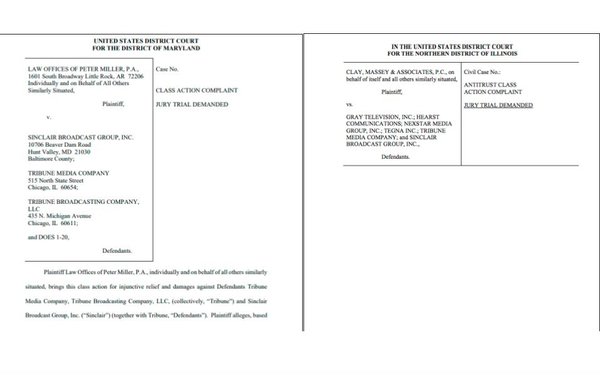