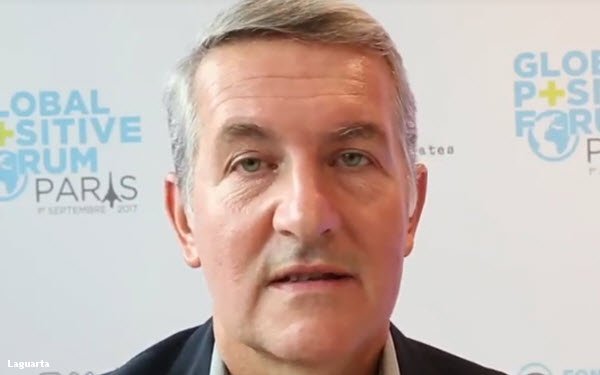 This morning, PepsiCo announced that Indra Nooyi is stepping down as its CEO after 12 years, to be succeeded by Ramon Laguarta.

PepsiCo's board of directors elected Laguarta, 54--a 22-year PepsiCo veteran who has served as the company's president since September 2017--to CEO and to the board. He will assume the CEO role on October 3. Nooyi, who served in various executive positions at PepsiCo for a total of 24 years, will stay on as chairman until early 2019.

PepsiCo said that the rest of its senior leadership will remain unchanged.

As president, Laguarta has been overseeing global operations, corporate strategy, public policy and government affairs. Previously, he served as CEO of the company's Europe Sub-Saharan Africa division, described by PepsiCo as one of its "most complex...with operations spanning three continents" and comprising developed, developing and emerging markets. Prior to that, he was president, PepsiCo Eastern Europe region and served in a variety of sales, marketing and other commercial roles across Europe.

Prior to PepsiCo, Laguarta worked for Chupa Chups, S.A., a leading confectionery company based in Spain, where he held various international roles in Europe and the U.S. A Barcelona native, he speaks multiple languages, including English, Spanish, French, German and Greek.

PepsiCo's board praised Nooyi, who led the company through its most challenging period, due to the long decline in sales of carbonated soda, as consumers have turned to healthier beverages. Nooyi implemented a strategy of acquiring and developing more healthful products and beverages, with somewhat mixed results, and fended off pressure to break up the company from activist investor Nelson Peltz, of Trian Fund Management.

During her tenure, Nooyi "delivered strong and consistent financial performance, managing with an eye toward not only the short run, but the long run, as well," stated presiding director Ian Cook, speaking for the board of directors, in announcing the news. 'As CEO, she grew revenue more than 80%, outperforming our peers and adding a new billion-dollar brand almost every other year. And shareholders have benefited: $1,000 invested in PepsiCo in 2006 is worth more than two-and-a-half times that amount today.

"At the same time [Nooyi] has invested for the future, leading the way on corporate sustainability and responsibility, and embedding a sense of purpose in everything the company does. As one of the first Fortune 100 CEOs to embed sustainability targets into business operations, [she] was a pioneer, paving the way for a new generation of business leaders who seek to 'do well by doing good.' Under her leadership, PepsiCo grew its portfolio of Good for You and Better for You options from about 38% of revenue in 2006 to roughly 50% in 2017, almost tripled its investments in research and development to expand its more nutritious offerings and minimize its environmental impact, and achieved global recognition for the company's work in communities around the world. "

PepsiCo has realized total shareholder return of 149% since Nooyi became CEO in October 2006, versus 197% at Coca-Cola and 173% for the S&P 500 index, according to FactSet data cited by The Wall Street Journal. PepsiCo’s market capitalization was $165 billion as of Friday's close, versus Coca-Cola's $200 billion. PepsiCo revenue grew 81%, to $63.5 billion in 2017, during her time as CEO.

Nooyi, 62, asked the board to begin preparing for her departure more than a year ago, reported WSJ.

The board emphasized Laguarta's international experience. Laguarta "equally represents continuity and the necessary agility for PepsiCo," stated Daniel Vasella, chairman of the board's Nominating and Corporate Governance Committee. He "is a strong and proven executive with an outstanding track record, growing organically and by acquisition some of PepsiCo's largest and most important international businesses. He keenly understands the evolving needs of consumers and customers and the trends affecting our business in markets around the world."