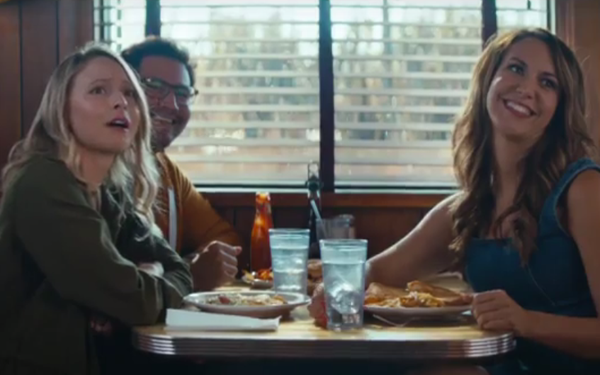 HotelTonight is now suggesting, “Let’s Have a Threeday” in a series of commercials aimed for digital placement.

Someone misunderstands an innocent invitation to a three-day weekend at a hotel for something it’s not.  In the HotelTonight spots, that’s because some competing natural noise -- a clanging pot, a sneeze -- obliterates the word “day” and replaces it with somebody’s . . . sexier imagination.

It’s reminiscent of current television ads that have run for months, in which couples who think their Sling-watching friends invited them over to “swing” make the same kind of mistake.

The HotelTonight ads feature comedian Rachel Feinstein, who these days is touring and hosting a podcast with Amy Schumer, and were directed by Mike Bernstein, who worked on digital shorts for “Saturday Night Live.”

The digital spots  will be fortified in Los Angeles and New York with “significant” out-of-home campaigns, according to the company. HotelTonight worked on the campaign with the San Francisco-based agency Mekanism.

The ads reflect the trend for shorter vacations, with more folks taking three-day weekends closer to home, and the four-day work week gaining momentum, according to HotelTonight, which says its bookings of three-day stays via its app are up a  big 41% over a year ago.

“While other OTAs [online travel agencies] continue to push extended summer vacations, we represent the perfect solution to the everyday getaway,” says HotelTonight creative director Jordan Braun in a statement. “We wanted to deliver a series that’s both true to HotelTonight’s brand voice and more relevant in today’s on-demand world.”

Taken more literally, though, there probably is some kind of hotel business for “three ways," too. According to a 2017 survey of 2,000 U.S. adults 18 years old or older, 17.8% of men and 10.3% of women have been in a three way in their lifetime, as reported in Plos One, a journal published by the Public Library of Science.