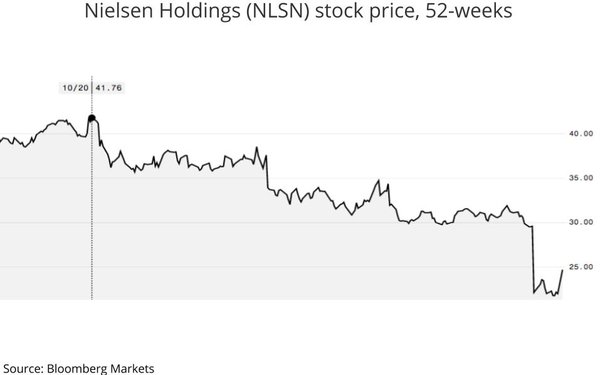 Shares of Nielsen stock rallied a bit on Monday on news that an activist investor is amassing shares of the publicly traded company with an eye toward acquiring it or forcing a sale. The move marks a new chapter in what arguably has been one of the most flipped strategic assets in the advertising, media and marketing industry.

Nielsen -- which began life as a the privately held A.C. Nielsen Co., went public, was taken private, then acquired by a private equity firm, and taken public again -- has created fortunes for investors, employees and key members of its management team, and the latest play comes as the company appears to be in a tailspin with its stock price languishing near its recent low following a spate of negative news and downgrades from Wall Street securities firms.

The latest news that billionaire Paul Singer’s Elliott Management Corp. has accumulated shares and options totaling 8.4% is seen as a fait accompli that the company is once again in play.

The timing of yet another round of disruption is interesting given Nielsen’s market dominance in media research, because its chief rival, comScore is now seen as ascendant with a new energized management team led by former CEO Bryan Wiener, founder and former chairman of Dentsu Aegis Network’s 360i.

Conversely, Nielsen’s CEO Mitch Barns is retiring at year’s end, and the company has yet to announce a successor.

Meanwhile, Wall Street already is speculating on how a Nielsen takeover play could manifest, with likely suitors ranging from Big Data platforms such as Salesforce.com and Oracle, or even cash rich big digital platforms like Google and Facebook.