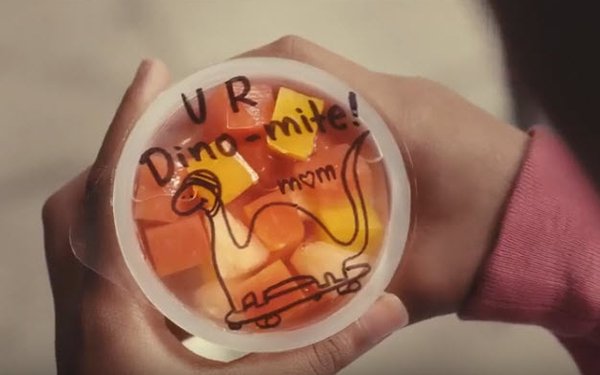 Dole Fruit Bowls is flipping from benefits-oriented to emotional and nostalgic with its new campaign, from the RPA agency.

The brand’s previous TV campaign -- “Drain it or Drink It,” from Dailey & Associates -- was seemingly ubiquitous between 2015 and 2017.

The first TV ad in the new campaign, “Traditions” (30-second version below), shows a mom writing loving and encouraging notes on the lids of her daughter’s fruit bowls at various stages of the girl’s childhood and teen years. A final vignette shows the daughter, now grown up, in turn using a fruit-bowl lid message to announce some good news to her mother.

The spot is backed only by quiet guitar music, except for a female voiceover and on-screen title at the end, over a product shot stating: “Sharing sunshine for generations. Pass it on.”

The new creative also marks a shift to a family vibe, while the previous campaign focused on conversations between young adults.

“This campaign will stand out with its heartfelt reminder to parents to give a little extra love with their kids’ snacks,” said Stan Stuka, senior marketing director, Dole Packaged Foods.