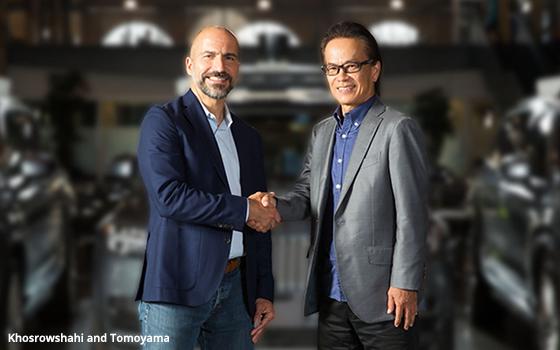 Consumers may not be clamoring for self-driving cars but the companies working on them are moving full steam ahead.

At CES in January, Toyota introduced its concept self-driving vehicle along with its intention of transforming Toyota from a car company to a mobility company. Toyota’s vision for future mobility involved self-driving, all-electric, ride-sharing vehicles using Toyota’s new concept vehicle.

A few months later, Toyota announced the formation of a new company called Toyota Research Institute – Advanced Development, a venture in which Toyota, Aisin Seiko and Denso Corporation would invest $2.8 billion, with plans to add a staff of 1,000 employees.

Now Toyota is teaming with Uber to jointly create autonomous vehicles to be used by Uber’s ride-sharing services. To push this along, Toyota is investing $500 million in Uber.

Like other autonomous vehicle creators, Toyota sees autonomous vehicles more as a service, as in “mobility as a service,” rather than a transformation of the auto business to become one of sellers of self-driving cars to individuals. As part of the new venture, Uber will supply its self-driving system to Toyota Sienna minivans, which will be owned and operated by a third party, a new business model for Uber.

Toyota is becoming well-positioned in the autonomous vehicle race, since it is headquartered in Japan with a global focus, with the best markets for early self-driving vehicles yet to be determined and which could well be in Asia. Baidu and Softbank already are working on creating autonomous mini-buses in geofenced locations in select Japanese cities.

The Toyota-Uber deal is just the latest announcement around autonomous vehicles.

For example, Ford, which recently detailed its vision for driverless vehicles  (Ford Details Its Approach To Self-Driving Cars: ‘Not For Everyone’), last month created Ford Autonomous Vehicles LLC, a new organization to accelerate its autonomous vehicles business. The automaker plans to invest $4 billion in the new venture.

Ford also is working on self-driving vehicles for Domino’s Pizza deliveries, Toyota’s concept vehicle could be used to deliver food and Boeing is working on creating pilotless aircraft.

Meanwhile, the majority (83%) of consumers expressed low or no interest in giving up control behind the wheel, based on a survey of 1,100 U.S. vehicle owners conducted by Esurance.

No matter, by the end of 2026, 21 million fully autonomous vehicles will be sold, according to a forecast by Juniper Research, which pegs Google as leading all manufacturers, followed by Volvo, Tesla, Daimler and Audi.

Now Toyota is looking to get on that list.