Spotify Adds Access To Showtime To Its Students Bundle 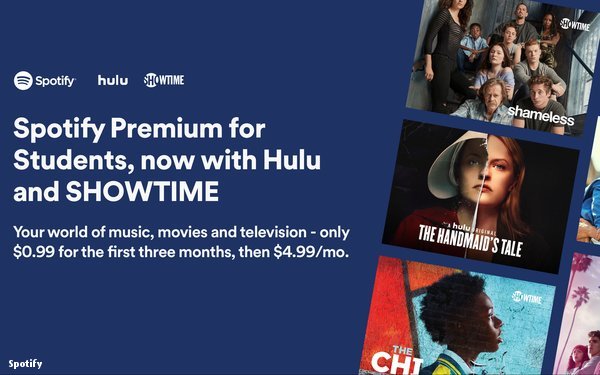 Spotify continues to use its Spotify For Students subscription to experiment with new bundling opportunities.

On Wednesday, the company added the streaming version of the pay-TV network Showtime to the bundle, which costs $5 per month and includes access to Spotify Premium, as well as Hulu’s ad-supported tier.

The bundle previously included only Spotify and Hulu, for the same $5 price point.

The student bundle marks a significant discount, as Spotify charges $12.99 per month to its non-student customers for a bundle that includes Spotify Premium with Hulu.

Showtime on its own costs $11 per month, though promotional rates are often available.

The student bundles are not a profit center for Spotify. Rather, the goal is to get college students into the habit of subscribing to premium content services.

The hope is that after they graduate, they will continue to subscribe at the higher price point.

For Hulu and Showtime, the bundle also gets their programming in front of college students, with similar goals of keeping them in the ecosystem after they graduate. Showtime COO Tom Christie stated the deal gives the video service access to "a new group of subscribers" that may not currently be paying for premium TV content.

Spotify also uses its student bundle as a test for more mainstream bundles. Spotify launched its $5 bundle with Hulu last year, and earlier this year, rolled out the $12.99 version for the general public.

Bundling premium content into Spotify Premium has been a  key focus for the company. It's part of its fight for market share against Apple Music and free competitors like Pandora.