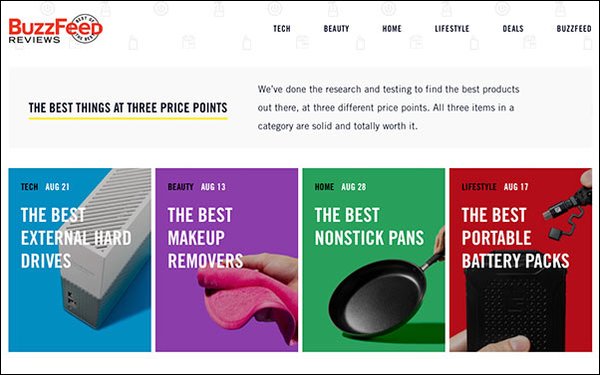 BuzzFeed has launched a product review site, recommending products to readers and expanding the publisher's affiliate business.
The live site is called BuzzFeed Reviews, although The Wall Street Journal notes the company has not formally announced its debut.

Each list is labeled with its category, such as “tech,” “beauty” and “home,” and all articles are displayed in a colorful tile with a product image. The lists give readers different buying options, with links to retailers like Amazon, Target and Walmart.

BuzzFeed gets a cut from every sale when consumers use the links to purchase products from the retailers.

Other BuzzFeed brands, including Nifty, Tasty and As/Is, will distribute Reviews content, too.

BuzzFeed Reviews is another effort by the digital publisher to diversify its revenue streams. In December, BuzzFeed CEO Jonah Peretti said the media company has to reorganize its ad sales department, focus on its lifestyle and service-journalism brands and evolve them into multiple revenue stream opportunities “amid a tough digital media market.”

While  BuzzFeed has recommended and reviewed products on its site for some time now, this new initiative signals a focus on its affiliate business.

In November, The Wall Street Journal reported that BuzzFeed was planning to double down on its ecommerce team as part of a wider business reorganization. BuzzFeed already has more than a dozen people on its commerce team.

A number of publishers have also set their sights on affiliate revenue. The New York Times acquired the product recommendation site Wirecutter in 2016. Gizmodo Media Group launched The Inventory, a site dedicated to curating new consumer products and home to all of the publisher’s commerce content.

Hearst Magazines acquired a minority stake in Gear Patrol, an enthusiast men’s brand, to grow its existing ecommerce business. Gear Patrol generates 25% of its revenue from ecommerce and affiliate links.