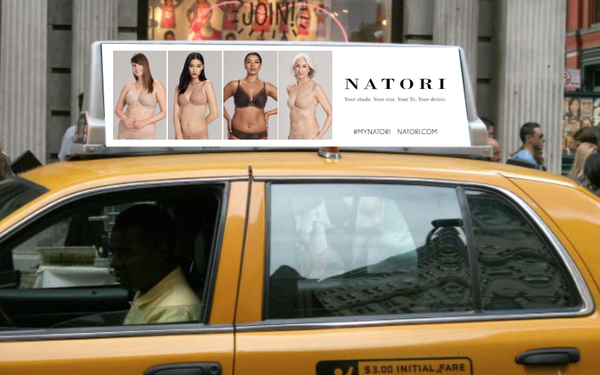 Designer lingerie brand Natori is launching a nationwide campaign that aims to celebrate the diverse backgrounds, ages, body shapes and sizes of its customers.

#MyNatori is a departure from the brand’s traditional campaigns, which are generally geared toward generating awareness for new product styles or fashion colors.

Instead, Natori chose to focus on the basic colors of its most popular bra styles: Feathers (originally released January 2009), Flora (February 2017), Pure Luxe (October 2014), and Bliss Perfection (May 2015). These bras are featured on women of all ages, shapes, ethnicities and sizes, and interspersed with testimonials from real Natori customers.

The #MyNatori campaign is a nod to the brand’s more than 40-year commitment to honoring its own international origins (it was founded by Josie Natori, a fashion designer from the Philippines) for its labels including Josie Natori, Natori, Josie, and N Natori, says Ken Natori, company president.

“We create fashion with the goal of making women feel special," Natori tells Marketing Daily. "As we conceived this campaign, we wanted to make sure everything from creative to distribution gave all women that same sense of importance and inclusion.

"From our product ideation to our charitable work, the latter of which is focused on organizations that empower and educate women around the world, we center our company around women. We wanted to make sure this campaign reflected that mission.”

The campaign launches Sept. 4 with four videos and still photo content from Cool Gray Station on social media and digital channels, and the phased unveiling of 14 influencer collaborations. The campaign extends outdoors on Sept. 17 to Taxi TV, digital bus shelters and taxi tops in New York City, San Francisco and Chicago. It will run through the end of October.

Natori worked with The Shelf to identify 14 social media influencers to represent the spirit of the campaign through social media content, such as model Anna Krylova and style blogger Ashley Dorough.

Inspiration for the #MyNatori campaign came from insights provided by Natori’s on-the-ground store coordinators and artificial intelligence marketing partner Albert. The coordinators, who work directly with the brand’s brick-and-mortar retail partners, suggested that Natori use models that more closely represent the brand’s evolving audience. This sentiment was reiterated by Albert, which identified a number of high-value audience niches that would benefit from creative designed specifically to reflect their unique needs.

The Natori team committed to focusing on campaigns more reflective of the brand's diverse roots. The campaign slogan — “Your shade. Your size. Your fit. Your desire.” — translates the brand’s everyday philosophy into language that speaks directly to the consumer, according to the company.

Creating content that better represents customers was only step one, says Ken Natori. Making sure customers see it is step two.

Albert will enable Natori to scale its reach with precision audience segmentation and targeting on social media channels, while programmatic partner FuelX will extend the campaign’s presence on digital.channels.

And when it comes to the brand's AI partner, "Albert doesn’t target a specific demographic or interest; instead, he discovers them," Mark Kirschner, CMO of Albert, tells Marketing Daily.

"His insights are far more granular than broad demographic ranges, however," adds Kirschner. "[Albert] detects highly nuanced patterns across online users and converts those into insights, such as 'women with college degrees who work in arts, entertainment and media, make more than $75,000/year and live on the west coast are likely to click on ads featuring purple.'"

"When he discovers a new audience that is performing really well, he lets his marketer colleagues know so they can take the discovery into account when planning strategy. It was just such insights that contributed to the genesis of this campaign," Kirschner says.