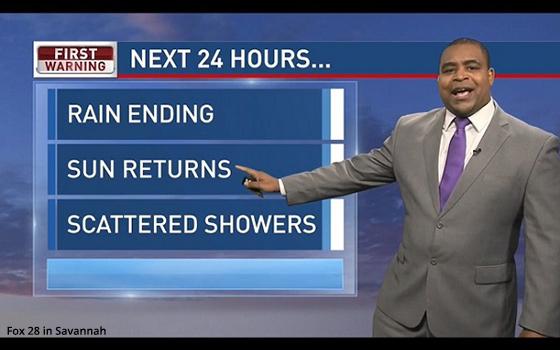 One of the joys of U.S. travel is the opportunity that a trip provides for sampling local TV media.

This was no less true on a late summer vacation to Savannah, Georgia and the surrounding area.

In this market, as in others that one sometimes has the pleasure of visiting, watching local TV news in the latter part of the evening can give the media-savvy traveler a glimpse at new and previously unseen trends in local TV news delivery.

Take, for example, the way this station -- Fox affiliate WTGS, “Fox28,” owned by Sinclair -- positions its weather forecasts on its 10 p.m. news. Instead of “First Weather” or “First Forecast,” WTGS news goes with “First Warning,” which implies a pending weather event worth noting, and possibly even fleeing from.

However, in the days we watched this newscast, no such severe storm or other event ever materialized. Instead, we were “warned” that it would probably be sunny, which it was.

It should go without saying, but here goes: Positioning ordinary weather forecasts as a “First Warning” is the kind of unnecessary exaggeration that people deride TV news for. Therefore, such gimmicks should be avoided.

The TV Blog wishes to emphasize that we mean no disrespect to Mr. Fraser for the use of this “First Warning” gimmick, which was likely imposed on his weather forecasts by news management.

Nor is the gimmick a reflection on Mr. Fraser either. He is a fine weatherman -- professional, polished and engaging.

Savannah is the nation's 90th-ranked market with 328,860 TV households. WTGS seems to operate its news on a shoestring, although the mostly young, earnest reporters and anchors on the station seem like a fine bunch of up-and-comers.

Two correspondents we saw repeatedly were Caitlyn Penter and Briana Trusty, and anchorman Trey Paul. Keep up the good work, you guys.

One thing plaguing this station's newscasts, however, was misspellings. This is an increasing phenomenon of TV news everywhere, even in New York, so it is not limited to WTGS in Savannah.

But in the days we watched WTGS's news, one misspelling of several that we saw had “Mcain” on screen for an entire segment about the death of John McCain. C’mon, people -- we can do better.

More jarring than the station's “First Warning” weather reports was another feature apparently provided by Sinclair to its station newscasts -- something the company calls its “Terrorism Alert Desk.”

This feature is positioned as a daily report on terrorism around the world, even when there isn't any. In that way, it is like the “First Warning” weather that has no inclement weather to warn anyone about.

Of particular fascination in our viewing of Savannah TV was the supply of local commercial advertisers, especially the series of commercials airing in the market for a sprawling local car dealership called O.C. Welch in nearby Hardeeville, South Carolina.

In this series of spots, company President O.C. Welch, Vice President (and son) Chip Welch or someone else was seen at a desk or standing in a showroom (if memory serves) announcing some deal or another. Last week's ads probably promoted some sort of Labor Day sale.

The commercials seen with O.C. Welch were eye-catching for two reasons. The first was the presence on his desk of one or possibly two bottles of Maker's Mark bourbon just to his left.

To my knowledge, the bourbon was never mentioned, much less consumed -- so the presence of the Maker's Mark brand in this spot was mysterious.

Reached by email on Tuesday, however, Mr. Welch provided a friendly explanation. “No particular reason,” he wrote, replying to my question asking about the Maker's Mark bottles. “Always something different on the desk to draw attention. Thanks for the feedback. Everyone knows I don't drink. Have a great day!! God Bless America!!”

Also present on Mr. Welch’s desk: A small dog named Gus, who is apparently a current mascot for the dealership. Gus paced around the desktop while Mr. Welch faced a camera and recited some ad copy. At the end of the spot came the reason for Gus’ presence as a slogan suddenly appeared that read: “Gus says: Go see O.C.!”

All of the O.C. Welch spots ended with Mr. Welch, his son or whoever else saying: “God bless America” (just like in Mr. Welch's email to the TV Blog) -- which was a very nice touch.

It was also a coincidence too because while I was watching local TV in Savannah, I was thinking the very same thing.