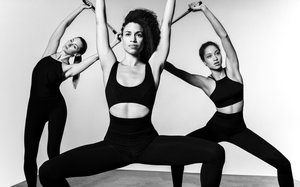 Pure Barre, a national boutique fitness chain, wants people to see just how body-changing its ballerina moves can be. The fast-growing brand is introducing its first-ever brand campaign, hoping to show the world just how challenging -- and rewarding -- its workouts are.

As it adds its 500th studio, “we knew it was time to introduce the barre concept in general to the public, and to show what Pure Barre is,” says Christina Russell, CEO of the Denver-based company. “This video campaign captures the cool factors, and really tries to get the heart of what we are. We talk a lot about grace and grit, and this reflects that. It gives you a sense of the look, feel and energy that is in the room during class.”

And while other specialty fitness concepts like Soul Cycle, Crossfit and Spartan Races lend themselves to dramatic (and often mud-drenched) video, Pure Barre has the challenge of translating its minute movements into meaningful visuals.

“If you watch a class, it is very small and undramatic,” she tells Marketing Daily. “It’s deceiving. You really have to push yourself, and your muscles shake all over.” The brand, which attracts people primarily in their 20s, 30s and 40s looking for the long, lean muscles of a dancer, promises a noticeable difference in as few as 10 classes.

Themed “Pure Effect,” the all-digital campaign (running on the company website and social media channels), is from New York-based Matte Projects, and portrays 10 devotees, a group the company says represents the diversity of its more than 550,000 clients. With phrases like “Pure Willpower” and “Pure Grace,” it focuses on each of the featured member’s personal relationship with the workout.

Pure Barre says it’s been growing at about 35% a year and is set to introduce Pure Reform classes, a total body workout.

Boutique fitness has taken on greater importance, Russell says, “because consumers like to snack. They want to do Soul Cycle and barre, as well as their regular gym routines.” (The popularity of ClassPass, which provides entry to a variety of workout studios for one fee, is fueling that trend in urban areas, she says.)

Russell says that one of the workout’s major appeal is a certain type of mindfulness. “With many popular workouts, like Crossfit and HIIT, there’s this idea that you leave it all on the floor. With Pure Barre, you come in to get it all back and rebuild that balance. We want this campaign to convey that.”