The Quirky Side of Agency Leadership 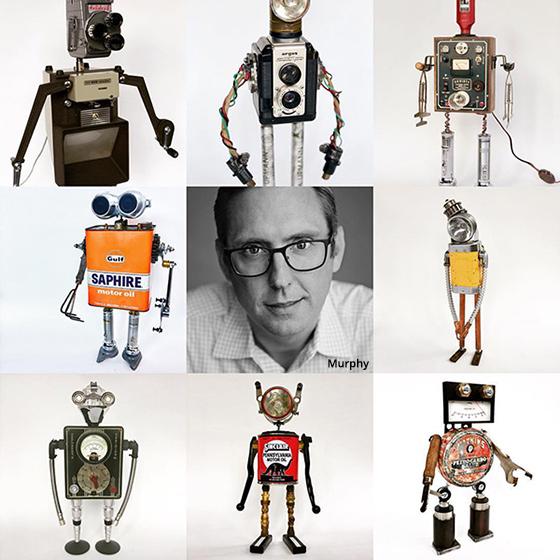 The advertising world tends to attract quirky personalities and many agency leaders have hobbies and other interests that put those personalities on full display.

Take Brandon Murphy -- the president of 22squared -- for example. When he’s not overseeing creative work for clients like Dunk’n and PGA Tour Superstore, he likes to build “junk bots” in his spare time.

The bots are on display at the @BotBuilds Instagram account.  Some of them make quite an impression.  “Christy,” for example, is described by Murphy as “smart, dependable and made to teach others. She also lights up the room.” (Literally.)

Murphy grew up on a farm in South Central Indiana. "I'm used to working with my hands,” he notes. “My uncle was a junk hoarder and welder I guess this rubbed off on me a bit."

The agency's Atlanta location provides a perfect hunting ground for "old stuff that needed a new life," he explains. "Add that together with my unhealthy obsession with Star Wars droids and you get my most recent hobby.”  Creating junk bots, that is. “I don't weld. I use nuts and bolts to assemble things that weren't meant to go together. It's like solving a puzzle while creating something new all at the same time."

He isn't about to jump ship to become a full-time bot builder, adding all profits from the sale of these bots going to Camp Sunshine to help kids and their families cope with cancer.

At agency Phenomenon, Chief Strategy Officer Jason De Turris stands out as one of Bob Dylan's biggest fans. And you’re probably thinking to yourself: well, a lot of people are big Dylan fans -- nothing terribly quirky about that. But how many people do you know plan to take off at least a week to properly grieve when Dylan heads for that great recording studio in the sky?

Quirkier still: De Turris’ contract actually provides him with one-week bereavement leave when Dylan dies. (For both their sakes, let’s hope the great balladeer won’t be Knockin’ on Heaven’s Door for a while yet.)

Digitas North America Global Brand President Michael Kahn has great athletic aspirations, including finishing the Chicago Marathon some day. Last time out he made it halfway before a burning desire for brunch took hold. The novice skier also overestimated his ability to ski black diamond runs in the Alps. He jokes that he aims high, but admits he is beginning to realize that a gold medal is probably not in his future.

180LA's Al Moseley ends his morning run with a "mysterious green juice," devoid of all sweeteners. He often brings it in to work to share. And employees can expect a glass of Al's special green drink waiting for them on their birthdays. Everyone drinks it. Whether they like it or not, the global president/CCO seemingly jokes. Yeah, as birthday gifts go, that’s pretty high on the quirk quotient.

On or off duty, Fancy's Erica Fite likes to share her passion for romance novels. The agency's co-creative director/co-founder collects 1940s and 50s pulp romance novels, which she displays and often reads out loud in the office. Visitors beware!  She tends to require guests to the agency's office to read excerpts of his or her choice. "We’ve gotten quite a few excellent readings on video from this Fancy book club," she says.

And Obviously's Mae Karwowski is obsessed with corgis. The influencer marketing agency's founder/CEO documents every corgi sighting on her social media accounts and requests that her team does so as well, tagging her on Instagram. Her love extends beyond the real animal. "Even today, an account manager got me a pair of socks with Corgis on them," says Karwowski.

advertising, agency, management
3 comments about "The Quirky Side of Agency Leadership".
Check to receive email when comments are posted.
Read more comments >
Next story loading