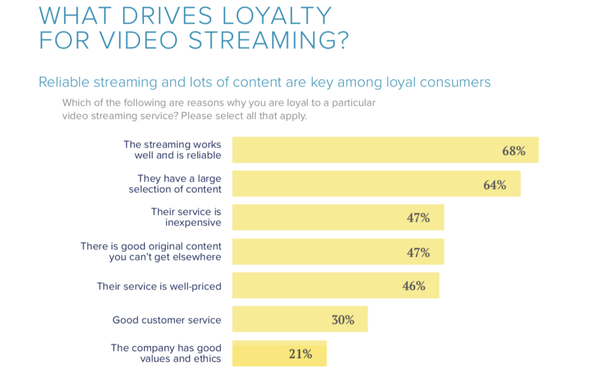 Are  streaming video users just one bad binge away from going elsewhere? Some new research from Washington, D.C.-based Morning Consult says it depends on the age of the consumer.

But, surprise: In this instance, it’s the older demographic that has the least brand loyalty, a flip on the old marketing idea that older consumers usually stay put.

Morning Consult says younger streamers are more loyal: 60% of Gen Z and 59% of millennials consider themselves loyal to one subscription video-on-demand (SVOD) service  or the other. That compares to 47% of Gen X and 41% of baby boomers who profess that kind of devotion.

That loyalty continues when the subject is smartphone brands, also studied by Morning Consult.  With some deviation, younger users are more loyal than older ones.

Rate increases of $6-$10 and above are deadly: 49% would likely quit, and 28% say they would be somewhat likely to cancel, too.

The Morning Consult survey lumps together a few disparate consumer loyalty gauges, ranging from the overall brand with the most loyalty (Walmart beats Amazon) to loyalty in the consumer health and beauty packaged goods area, and smartphones.

A consumer’s cell phone carrier engenders the most loyalty of any kind of consumer-facing business: 69% are loyal to their provider, ahead of their bank (68%) and tobacco (63%).

Heading over to the consumer packaged goods area, curiously (or not), 61% of deodorant consumers say they are loyal to a brand, and 46% of them say they will seek out their preference even when there are good alternatives. No other personal care item -- from toothpaste to shaving cream -- has such loyal customers.