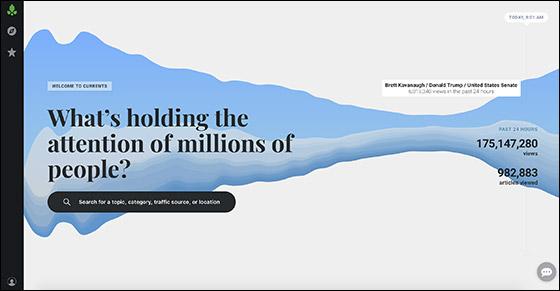 Parse.ly, an analytics and content optimization platform for digital publishers, has released an internet attention-measuring platform to the public, called Currents.

In beta with several publishers since the summer, Currents measures how audiences allocate their time spent consuming content online.

The metric of internet attention is a fairly unique measurement model. Rather than tracking search trends, it measures how different topics, moments, contexts, locations, devices and sources interact with each other in real-time.

Currents does this for a global audience of 1 billion, across 1 million news stories daily, according to Parse.ly. It has 90 days of historical data available to Currents users, as well as a real-time view.

Parse.ly says there are different ways publishers can use Currents. They can see what people in specific markets are reading and use paid social promotion to boost content around that subject in those market areas.

Parse.ly, which is used by major publishers like The Wall Street Journal, Condé Nast and Hearst, will offer Currents to users with three pricing tiers. It is free for all Parse.ly Analytics users.

With the subscriptions, users can also get alerts when stories are breaking, as well as save searches.

Before the release of this platform, Parse.ly argues, only a handful of companies (like Facebook and Google) had a full view on how audiences spent their time online and the “interdependent” relationships between different attention allocation variables, such as location and devices.

Core features of the Parse.ly Currents platform include “story clusters,” which group user attention around closely related articles, like a news cycle, and the ability to look at which topics and categories audiences are consuming.

For example, the release of the new iPhone as a topic had two distinct story clusters - one around the new model, and the other around the new operating system, iOS 12. Publishers can also use Currents to benchmark content on a certain topic.

In the future, Parse.ly is looking to combine its Analytics platform with Currents. If a reporter has access to both, they can see if they owned the coverage on a certain topic in the last few days, by comparing internet attention trends with their own numbers, Montalenti said.

Over 30,000 journalists are active users of Parse.ly Analytics.

They could also use Currents to see where they could grow their audience, or coverage areas to expand into, Montalenti notes.

Currents is like a “transparent flashlight to the world to see how all this news and information is flowing,” he says.