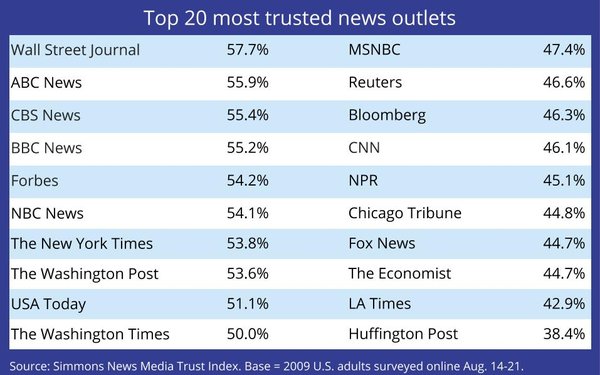 A new small, but influential segment of the American population has been detected. They consider no news sources to be “trustworthy.” It happens to be the one that vote disproportionately to elect the current President of the United States.

The segment, which has been dubbed “Doubters” by researchers at Simmons Research, represents about 13% of Americans.

While they are less likely to vote overall, they voted for the current President by a margin of more than two-to-one vs. Democratic rival Hillary Clinton.

“Simmons’ data suggests that about 6 million people of the 129 million who voted in the 2016 election were ‘doubters’,” explains Matt Cumello, Simmons senior director, marketing.

The findings, which were derived from a special omnibus survey Simmons fielded in August to understand the trustworthiness of 38 news organizations among Americans, found The Wall Street Journal ranks No. 1, followed by ABC News, CBS News and BBC News.

The Huffington Post ranks as the least trustworthy among the top 20 news outlets.