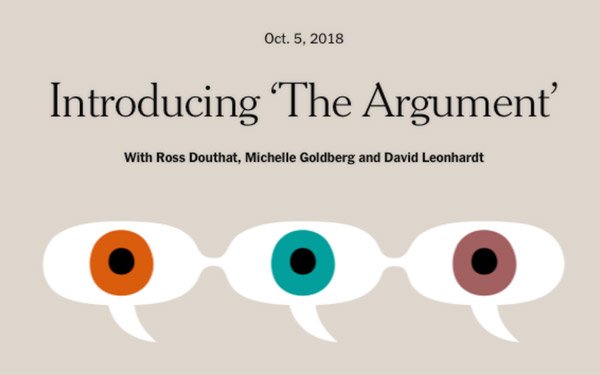 is introducing a political podcast next Thursday, called “The Argument.”

It will be hosted by three Opinion columnists with very different political leanings: Ross Douthat, Michelle Goldberg and David Leonhardt.

“We're really at risk of losing sight of the notion that disagreement can be constructive — that it's pretty rare for any of us to be entirely right or wrong about anything," stated James Bennet, editorial page editor of The New York Times. "Our columnists have strong, hard-earned convictions, but they also remain deeply curious about why others might see things differently, and I look forward to hearing them hash out the big questions of our times.”

“If Americans stop listening to each other, democracy cannot work,” Leonhardt says in the trailer for the new audio series on Apple Podcasts.

Douthat has been an Opinion columnist for the Times since 2009, Leonhardt since 2016 and Goldberg since 2017.

Douthat, a religious conservative, is the author of several books, including his most recent title, To Change the Church: Pope Francis and the Future of Catholicism.

Leonhardt -- who says his political views sit "well to the left of Ross’s and somewhat to the right of Michelle’s" -- was previously Washington bureau chief for The New York Times and founding editor of "The Upshot," the Times’ data and analysis-driven vertical focused on politics, policy and economic.

Goldberg, a progressive, has written several books about politics, religion and women’s rights, and was part of a team that won a Pulitzer Prize for public service in 2018 for reporting on workplace sexual harassment issues.

“I disagree with basically everything that Ross writes,” Goldberg says in the trailer.

The three hosts will have special guests on the show to “guide curious listeners through the news with their signature commentary and discourse to help them navigate the arguments shaping and reshaping the direction of the country," according to a statement.

New episodes will release every Thursday on The New York Times website and wherever podcasts are available.