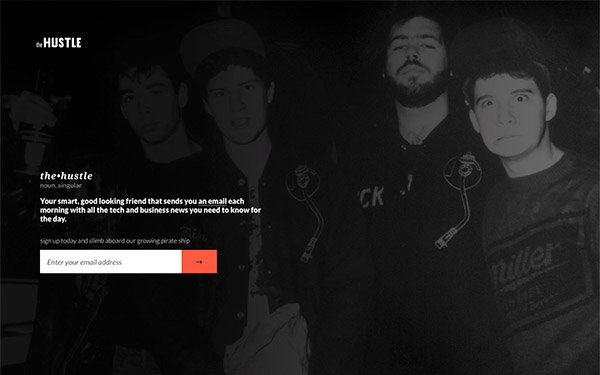 In The Hustle, a daily business newsletter, CEO and cofounder Sam Parr said the 1 million mark was “a goal we’ve been laser-focused on accomplishing since day one.”

Parr writes in the newsletter today that one of the reasons he and cofounder John Havel started the company in 2016 was they "thought most of the biggest news companies out there were garbage.”

“They pushed inauthentic content written to impress other journalists rather than putting the user first; they treated their readers like idiots, had obvious agendas and were poorly run businesses,” he writes. “Our motto from day 1 has been to treat you like our smart friend -- not just a click that makes us ad revenue.”

Written in a colloquial and humorous tone and focused on technology, the newsletter targets entrepreneurs and business people.

More than half of its subscribers either work for or have founded companies recently. About 68% of subscribers are with organizations five years old or younger, with a male/female readership nearly split down the middle.

The Hustle has attracted sponsors like GE, Microsoft, American Express and T-Mobile. (Email sponsorship packages range from $10 to $40 cost per thousand sends, according to a report from Axios.)

The company says it is profitable, with revenues in the seven figures.

Dave Nemetz, cofounder of Bleacher Report, and entrepreneur Tim Ferriss are some of The Hustle’s investors. "I invested and believe in The Hustle because it capitalizes on one of the last places where a brand can control its destiny: the inbox," stated Ferriss.

The Hustle has an average open rate close to 50% -— industry standards usually hover around 20%. It is read by more than 500,000 recipients daily, according to the company.

The newsletter grew out of the annual Hustle Con events in San Francisco for start-ups.

Parr told Publishers Daily part of The Hustle's success comes from its own CMS platform.

"It has created incredible business efficiency for us. We are always able to sell out our inventory because our sales and ad team always know what's available at any given moment," he said.

The CMS, Parr added, has also "allowed us to grow quickly because we're able to incorporate both first- and third-party data in there. We know who's consuming what, why, and when. We continually use that information to grow. Just one example is our ambassador program, which is built directly into the CMS."

Going forward, The Hustle is testing a subscription service for entrepreneurs that will launch in the next few months.

Called “Trends,” it will be the company’s first consumer subscription product. It aims to help the newsletter’s entrepreneurial audience start and grow their businesses, with reports on gaps in the market that entrepreneurs can capitalize on.