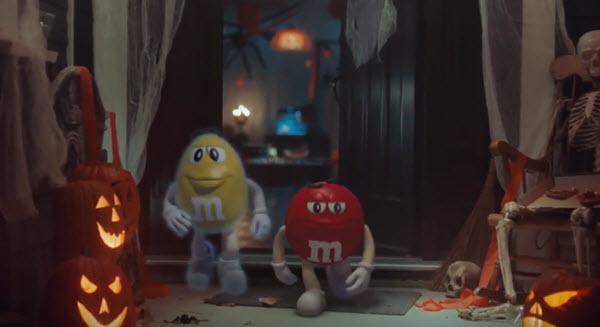 M&M’s is tricking its Yellow character, but treating fans, with its first Halloween TV ad since 2007.

This year’s 15-second “Ghosted” ad (below) has Yellow and fellow spokescandy Red congratulating themselves, as they leave a holiday party, on having survived another Halloween.

But before long, Yellow is looking decidedly ghostly (not to mention showing a bite out of his back).

The creative, from BBDO New York, also includes a six-second version, “Eaten,” that will run online as well as on TV.

Both “Ghosted” and “Eaten” were also produced in Spanish-language versions for Hispanic audiences.

The ads will run online, as well as on TV, through the Halloween season.

Previous M&M’s Halloween ads have included 2007’s “Headless Horseman” and 2000’s “Ding Dong.” Both have run intermittently over the past few years.