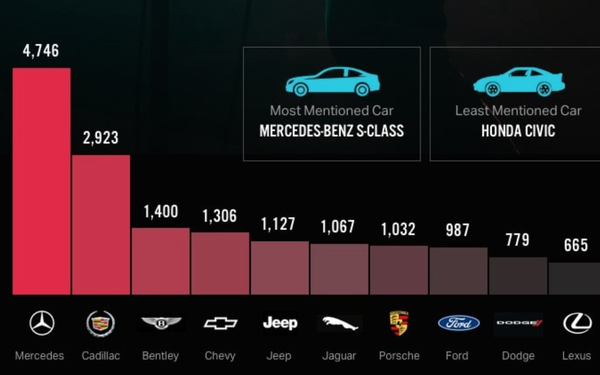 Driving around Detroit recently, I drove past a pristine pink Cadillac. Immediately, Aretha Franklin’s “Freeway of Love” popped into my head, and then I felt sad because my hometown is still mourning the death of the queen of soul.  I asked Siri to play me the song, which I grooved to for the next couple of minutes.

Beyond the importance of music in automotive advertising, musicians have embraced the relationship between music and cars for decades. Digital Third Coast wanted to know which artists sing the most about cars. The company analyzed an astonishing 100,000 songs from the lyrics.com database. The analysis includes a breakdown of who sings the most about car by music genre, the most-mentioned cars, as well as the artists that reference specific brands the most.

Surprisingly, 94% of the top 100 musicians who reference cars in their songs are classified as hip-hop artists or rappers. That’s not my genre of choice, and I still hear plenty of lyrics about cars. The two most memorable references (in my opinion), the Beatles’ “Baby You Can Drive My Car” and Prince’s “Little Red Corvette,” certainly don’t fall into that category.

“I think the by genre breakdown is a really fun part of the analysis, as it tells a story beyond hip-hop and rappers mentioning cars in their songs -- which may come across as obvious to fans of that genre,” says Matt Zajechowski, senior content strategist at Digital Third Coast.

“I listen to Ryan Adams and Prince all the time and it never dawned on me, until I saw the results, how much they mention cars in their songs. The analysis gave me a fresh view of some of my favorite artists,and made me take a re-listen to some of my favorite songs to see if could locate all the car mentions.”

The results for the country genre were actually really surprising to Digital Third Coast when digging through the data, Zajechowski says.

“When we had the idea of doing this analysis, we assumed, wrongly, that the country genre was going to challenge hip-hop and rappers for car mentions, as I think there’s a stereotype that most country songs are about heartbreak and a Ford trunk,” he says. “While the country genre was well-represented, it still fell behind both hip hop/rap and rock.”