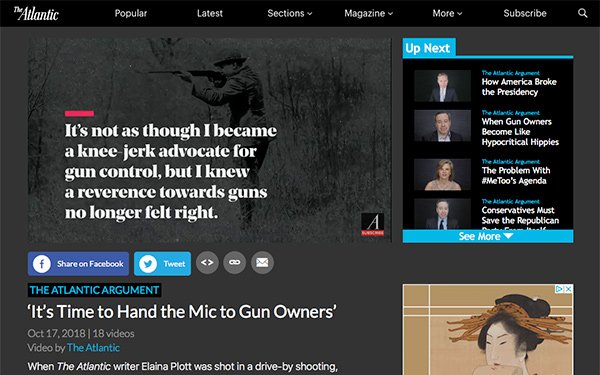 The Atlantic is relaunching its op-ed video series “The Atlantic Argument,” which stars its own writers discussing a range of topics.

“For the relaunch, our team is giving the audience a behind-the-scenes glimpse into the writer’s reporting and thought process, including more visuals, such as archival media and motion graphics,” Kasia Cieplak-Mayr von Baldegg, executive producer for Atlantic Studios, told Publishers Daily.

The first episode features staff writer Elaina Plott discussing gun control. She argues that politicians on both sides of the aisle should listen to gun owners with nuanced views in order to pass meaningful legislation.

Plott has covered the congressional response to mass shootings; she was also the victim of a drive-by shooting five years ago in her hometown of Tuscaloosa, Alabama. She wrote about the experience in an essay for The Atlantic’s October issue, “The Bullet in My Arm.”

The series will feature Alexis Madrigal on the impact of social media abroad and Caitlin Flanagan on sex abuse in the Catholic Church, as well as topics like healthcare, Silicon Valley, politics, culture and climate change, according to the company.

“The Atlantic Argument” was one of several new video series to launch last year. “You Are Here” is a series exploring science, health and technology, while “Unpresidented” addresses politics in the early Trump era.

The Atlantic’s YouTube page has over 200,000 subscribers and 46.5 million total views.