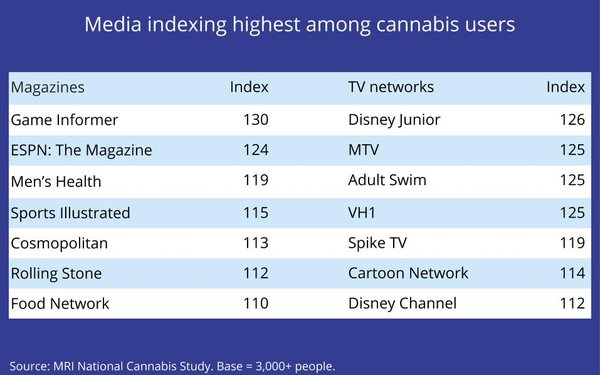 That’s the kind of insight MRI’s new National Cannabis Study reveals, dispelling -- and actually reinforcing -- some perceptions about the media consumption of people who consume marijuana.

Actually, an MRI spokesperson said High Times currently is not included in the survey, so it's not clear how much the title would index vs. the general population -- but at least one long-standing perception holds true: Rolling Stone magazine is among the highest-indexing cannabis user magazines.

Top magazines for cannabis consumers are People, Better Homes & Gardens, and National Geographic, but so are Men’s Health, Parents and Cosmopolitan magazines.

Parents makes sense when you consider that the MRI study reveals cannabis users also over-index in households with children.

And that may explain why Disney Junior is the TV network they also index highest against. Or it could reinforce the perception of stoners who like watching cartoons. After Disney Junior, the highest-indexing TV networks are Adult Swim, MTV, VH1, Cartoon Network, and Disney Channel.

MRI’s magazine data may also confirm a popular perception about cannabis users: Game Informer magazine is the highest-indexing, and Food Network magazine is among the highest.

The truth is probably somewhere between cannabis usage influencing media consumption or just being incidental to it, because the reality is the MRI study shows America’s cannabis users are a diverse population that in many ways are coveted targets for many consumer brand marketers.

They skew slightly male, have a median age of 39 and median household income of $66,000.

Editor's note: An earlier version of this article had a headline referring to High Times magazine, which was not included in the MRI study.