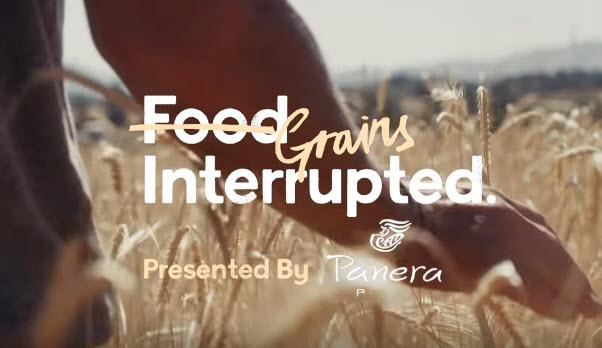 The video series, Food Interrupted, explores clean food issues by featuring what the chain calls “everyday heroes” who are working to improve the food system.

In the initial episode, “Grains Interrupted” (below), chef Marcus Samuelsson and Weiser Family Farms’ Jon Hammond discuss ancient grains and their role in the future of food.

The videos, produced by Participant Media’s SoulPancake and Ace Content in collaboration with Panera’s lead creative agency, Anomaly, are posted on Facebook Watch and a Food Interrupted site.

In addition to the long-form videos, the campaign includes more than 50 short videos and cutdowns being used across the brand’s owned channels and as paid advertising on YouTube, Facebook, Instagram, Twitter and sites/networks including Hearst and Discovery, reports Panera Bread Senior Vice President, Marketing Chris Hollander. The Huffington Post is among the campaign’s distribution partners.

The first video on grains ties in with Panera’s announcement that for all of its breads containing more than 50% whole grain, it will now label servings of whole grain per bread item, and the whole-grain percentage. The video and other campaign materials point out that, in the United States, bread with less than 2% whole grain can be labeled “made with whole grain,” and it takes only 50% whole-grain content to qualify for “whole grain” labeling.

As usual, in promoting the menu move and accompanying campaign, Panera Bread executives are stressing the brand’s commitment to transparency and commitment to changing the food industry for the better. Those concepts, based on the business philosophy of chain founder Ron Shaich, were codified as Panera's marketing positioning with its 2015 “Food As It Should Be” campaign and announcement that it would eliminate a long list of artificial ingredients (its “no-nos”) from its food.

”This isn’t just about selling salads and sandwiches — it’s about sparking dialogue and engagement and continuing to evaluate ourselves to do the right thing as a brand,” says Hollander of the new video series.

Similarly, in a Business Insider interview associated with announcing “Food Interrupted,” Panera CEO Blaine Hurst noted the videos’ low-profile approach to promoting Panera, stressing that while it of course wants to sell more food, “if that's our only motivation, then I don't think you can earn the consumer's trust.” In the campaign’s release, he reaffirmed that Panera believes that given its scale, “it’s part of our job to help revolutionize the food industry from the inside out.”

Of course, the well-documented stress that millennials and younger generations place on clean, sustainable food has forced even traditional fast-food giants like McDonald’s to adapt.

Head-on Panera competitor Chipotle Mexican Grill — which saw phenomenal growth driven by its movie-quality animated videos emotionally conveying its clean, sustainable food messaging —recently launched a “For Real” campaign focused on its 51 “real” ingredients as part of its push to recover from a series of food-borne illness episodes in recent years.

(Nor have Panera — and other restaurant chains — been entirely immune to food contamination problems. Romaine contaminated with E. coli made its way into some Panera, Red Lobster and Texas Roadhouse locations earlier this year, for example).

On the transparency front, some critics have asserted that reducing or eliminating artificial ingredients, while a good marketing story, is not the only nutritional issue restaurant brands should be addressing.

“Panera’s vision for transparency and healthfulness, while laudable, creates its own set of flaws by promoting pseudoscience through instilling fear of complex words in consumers,” wrote “Don’t Eat the Pseudoscience” blog (a group of self-described “young food scientists) in 2016. “These changes and deletions of ingredients do not necessarily reflect positive, healthier options. A quick glance at Panera’s menu reveals some items that are not only rather high in calories — per serving — but may also approach one’s daily limits of sodium, saturated fat, and total fat…” The blog also pointed out that many of the hard-to-pronounce additives on Panera’s “no-no list” aren’t harmful (tocopherol is actually Vitamin E) and some occur naturally in food products.

Just this week, commenting on “Food Interrupted,” Jennifer Marston observed in The Spoon: “It definitely is, or at least should be, the job of major restaurant chains like Panera to use their reach to change certain aspects of the food industry and in the process better educate the people who buy their food. Trouble is, this is coming from a company who offers the same high-calorie, high-fat kinds of food on which the fast-casual industry was built. Debunking food myths with celebrity chefs doesn’t negate the fact that Panera still serves up bacon mac ‘n’ cheese that clocks in at 1,100 calories per serving.”