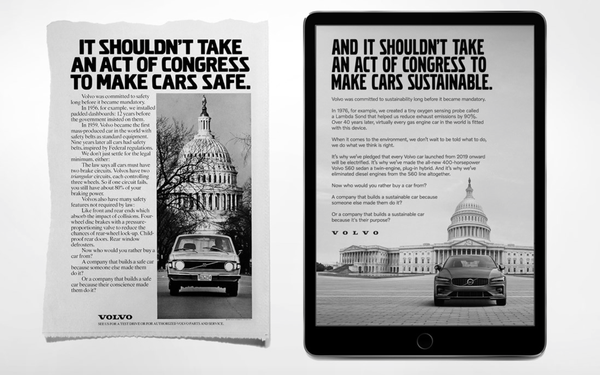 That’s the message of a nationwide digital and print public information campaign the automaker is launching. The digital portion of the campaign is live at sites like CNN.com, VOX, along with social.

Creative was handled by the Volvo in-house team and Grey New York, also featuring an original ad from 1973 from Scali, McCabe, Slove. Media buying is being handled by Mindshare.

The campaign will run across various media (digital, social, print) during the election and the weeks that follow, says Bob Jacobs, Volvo’s U.S. vice president of marketing, brand, and communications.

“We took inspiration from a similar campaign that we did in the early 1970s when there was a lot of debate about the need for automobiles to be regulated for safety,” Jacobs tells Marketing Daily. “We took a stand at the time that, as a brand, we are not driven by what we are required to do, but rather that we should go above and beyond in the best interests of our customers.

"Today the debate around sustainability and emissions standards has replaced that of safety, but our principles remains the same.”

The campaign also follows a number of efforts by the company that focus on sustainability, including a broad commitment to electrification of all new car lines from 2019 and a target of using at least 25% recycled plastics in every new car starting in 2025.

“We think the message has broad appeal to all who believe companies should take a leadership role in producing products in a responsible way, versus waiting for someone else to mandate it,” Jacobs says.

The campaign launches with a focus on the new S60 sedan, the first Volvo to be built in the United States and the first one without a diesel engine variant. Available with eco-friendly Drive-e engines, the S60 is available as a plug-in hybrid boasting 400 horsepower.

Volvo has not waited for regulators to set stronger requirements in the name of sustainability.  In comments recently to the U.S. Environmental Protection Agency and National Highway Traffic Safety Administration, Volvo supported year-over-year increases in fuel economy standards and reduction in carbon emissions.