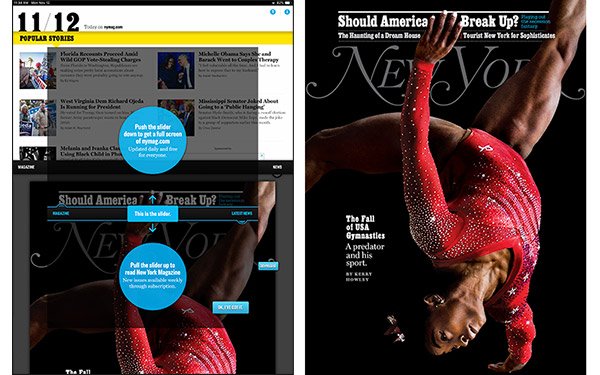 New York magazine is joining a growing number of publishers putting up paywalls to grow consumer-driven revenue, limit access to digital content to paying subscribers and lessen reliance on advertising.

A dynamic metered paywall will reach across all of New York Media’s sites, including nymag.com and its standalone verticals Vulture, the Cut, Intelligencer, the Strategist and Grub Street, starting later this month.

A dynamic metered paywall — as opposed to a static paywall, which allows readers to access a set number of articles for free before they are asked to subscribe — means readers will be prompted to subscribe based on a combination of factors.

Those include "the types of stories they read, depth of visits in a particular vertical and breadth of use of the sites. They will be alerted as they approach the limit of free articles," according to New York Media.

“We want to allow for discovery and exploration of our sites, while putting a value on the journalism we produce,” stated New York Media CEO Pam Wasserstein. “We’re aiming to separate casual browsers from super fans, and forge a deeper relationship with those fans who are passionate about what we do.”

Dow Jones, which oversees brands such as The Wall Street Journal, MarketWatch and Barron’s, claims its flexible paywall helped it grow to 3 million paying subscribers.

A new nymag.com homepage will launch with the subscription product. It will "better showcase content from across the New York Media network," with a new navigation to "reinforce connections between brands," according to the publisher.

New York Media claims it has a global audience of 45 million monthly readers per month.

Publishers from The Atlantic to Vanity Fair have recently established paywalls to grow subscription revenue in the face of an uncertain digital advertising environment.