Big Red Bows On Cars Are Back 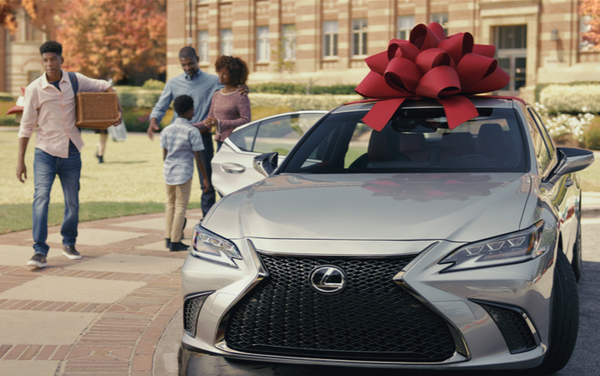 Halloween is over, and Thanksgiving will be here soon—which means it’s time for the return of TV spots showing the delighted recipients of cars with giant red bows.

For the 19th consecutive year, Lexus is launching its annual "December to Remember" sales event. The iconic marketing campaign debuts today with three national spots showing how the gift of a Lexus during the holidays is, to borrow a line from a Kodak campaign, the “gift that keeps on giving.”

Seven percent of consumers plan to gift in the automotive category this holiday, according to a new report by OpenX.

Who are these people—and why aren’t they MY friends and family?

To be honest, I was lucky enough to receive several cars as gifts from my auto-loving father. So it does happen. But it’s hard to imagine that holiday time, when wallets are so heavily burdened with mass gift buying, is the most popular time for car giving.

"This time of year is full of joy, magic and cherished family traditions that last well beyond the gift-giving season," said Cooper Ericksen, Lexus vice president of marketing, in a release. "We wanted to capture this idea that a 'December to Remember' with Lexus has the potential to create unforgettable moments that last all year round.”

All three commercials highlight families making memories with their Lexus throughout the year.

The first spot, "Memories," opens on a snowy day in January, showing two brothers in a snowball fight with the neighborhood kids in front of a Lexus ES sedan. (If I owned a Lexus, it would be parked in the garage, far away from all children, but alas, this is fantasy ad land.)

The camera cuts to the younger brother searching for Easter eggs in the park in April, and finding a yellow egg under the big red bow on top of the Lexus. Fast-forwarding to a bittersweet moment in August, the family unloads the ES to move their older son into his new college dorm.

"Celebrations" depicts a family of four running for cover to their Lexus RXL SUV after getting caught in a rainstorm during the daughter's May quinceañera. In the next scene, the family is enjoying fireworks and sparklers atop a scenic overlook on the Fourth of July. We cut to a high school football field in September, seeing the son suited up for the big game as he runs past the RXL.

"Joy," the final spot, starts in February with a couple leaving a romantic date in their Lexus NX crossover on Valentine's Day. The woman appears behind the wheel of the NX in the next scene, where the couple is leaving the beach in June. The camera cuts to the NX parked on the street of a neighborhood on Halloween with children in costumes trick-or-treating. A little girl in a ladybug costume gazes at the NX topped with the big red bow, matching the one she wears in her hair.

To extend the reach of the campaign, from Publicis Groupe's Team One  adaptions and translations of "Joy" were created by IW Group for Asian-American audiences across five key markets, while "Memories" and "Celebrations" have been adapted by Walton Isaacson for black and Hispanic audiences, respectively.

Digital will run on popular automotive, lifestyle and sport websites and out-of-home extensions will appear in 11 key markets, including high-traffic placements in Times Square and Capitol One Arena.

The Lexus sales event offers incentives through Jan. 2. That could be one huge reason to consider buying a vehicle at this time of the year.

"The best time to buy a vehicle is at the end of the month, end of the year and when the next model year reaches dealer lots," Lauren Fix, an industry analyst and editor-in-chief of Car Coach Reports, tells Marketing Daily. "They need to get rid of the previous years models, to make room for the newest products."

Some of the best deals of the year can be had now, and if you don’t mind buying last year’s model, the pot is even sweeter.

That said, prudent consumers should compare any technology advancements on the 2019 vehicle they are interested in vs. the 2018 edition. Cars are becoming like computers and phones. My 2015 model already seems like an antique compared to the now-available—and in many cases, standard—features.

There will soon come a day when every model on the road will have blind spot warning signals on side-view mirrors. That will be a very good day—but not as good as finding a car with a big red bow in the driveway.