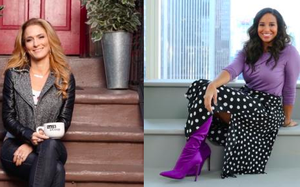 If you live in a market with an NBC-owned station, have been in a New York City taxicab, or turned on USA Network in the daytime, you’ve likely seen “Talk Stoop.”

It’s the series where a woman sits on a “stoop” interviewing celebrities. (For non-urbanites, a stoop consists of the steps leading up to a dwelling’s entranceway).

For nearly a decade, that woman was Cat Greenleaf, and her stoop was outside her actual Brooklyn home, just down the block from our apartment.

Now, that woman is Nessa, and her stoop is in Manhattan. Only it’s not a real stoop, but a few steps in front of a window in “a beautiful apartment high above the city on West 52nd Street.”

NBC replaced the show’s creator, Greenleaf, with Nessa earlier this year. Greenleaf has since sued NBC for unlawful termination.

I won’t comment on that case, or get into whether Nessa nor Greenleaf does a better show.

I come here instead to review the stoop of the show’s title.

Greenleaf’s stoop had a real door behind it. Nessa’s has a New York skyline.

Greenleaf’s stoop was once full of cracks, like many in our neck of the woods. It was finally redone with a smooth coat of concrete, she told me at the time, following her relief that a particular elderly actor hadn’t tripped and gotten injured.

Nessa’s stoop looks like it’s made of hard plastic, and I’m pretty sure you’ll never see any cracks on it.

Greenleaf’s real pet dogs, most often her late bulldog Gracie, would often join her on the stoop. You would sometimes hear street sounds in the background, or see a pedestrian strolling by. That sense of reality is missing in the new episodes.

When filming would take place on our block, a small group of neighbors or passers-by would gather around watching, something I’m sure doesn’t happen high up on 52nd Street.

If we happened to stroll by on filming days, we would be curious about whom Greenleaf was interviewing.

We could easily identify some guests by sight, like Cindy Lauper and fellow Brooklynite Keri Russell. For the names of others, we would likely query the jewelry maker two doors down from Greenleaf, or the nice folks working at the locally owned pharmacy right across the street.

We don’t talk with the jeweler or the druggists anymore. In the wake of the departure of "Talk Stoop," they too have closed up shop.

The timing is likely a coincidence. In any case, however, filling prescriptions at CVS or Rite Aid -- or browsing for jewelry at Swarovski or Kay -- feels as non-authentic to us as sitting on a plastic stoop.