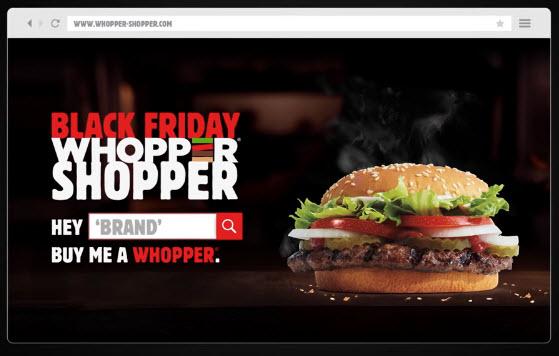 How can a fast-food brand insert itself into the Black Friday weekend shopping frenzy, win goodwill from shoppers — and gather invaluable consumer data in the process?

Burger King has come up with an ingenious way of doing all of that: a “Whopper-Shopper” digital marketplace that let shoppers earn vouchers for Whoppers by buying products from a choice of more than 1,000 online retail brands.

When a consumer clicks a banner ad on the Whopper-Shopper site and makes an online purchase from Walmart, Target, Macy’s, Timberland, Puma or one of many other options, Burger King applies the portion of that sale that it, as the site host, receives from the banner advertiser, toward Whopper vouchers for the shopper.

Shoppers (U.S. residents only) need to set up an account on Whopper-Shopper.com before shopping the banner ads there, and they’ll receive their earned BK vouchers by mail.

The site went live today on Nov. 15, and will operate through Cyber Monday, Nov. 26, “while supplies last.” Each user is limited to earning three Whopper vouchers, distributed as $5 BK gift cards.