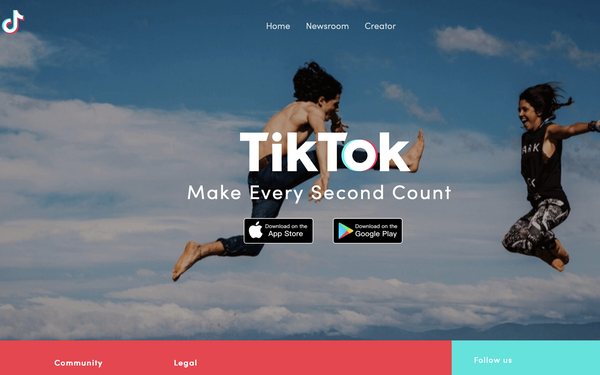 A new video app is taking the U.S. by storm. TikTok, from Chinese telecom giant Bytedance, has exploded in popularity over the last couple of weeks. It is ranked as the No. 5 free app on iOS as of this writing.

It now boasts over 500 million worldwide users, after having integrated a separate app, musical.ly earlier this year. While it has had a large presence worldwide since launching in 2016, its U.S. presence has made up a much smaller chunk of the audience for now.

Now, it is finally beginning to break through the app clutter in the U.S., finding an audience with the help of celebrities and influencers.

Just a week ago, “Tonight Show” host Jimmy Fallon joined the app, encouraging viewers to take the “Tumbleweed Challenge with him, featuring the best submissions on his show. His videos now have more than 10 million views, the company says.

Despite the relatively nascent U.S. presence, the app intelligence firm SensorTower estimates TikTok generated $1 million in ad revenue in October alone. As the app continues to gain traction, thanks to celebrity use and top placement in app stores, that number is likely to rise.

TikTok is a pretty simple experience. Users can upload their own videos, adding tools or filters to tweak the way the videos look or sound. It integrates musical.ly and its music platform as well, allowing users to lip-sync to clips of songs.

The app also includes a consumption element, with a video feed featuring curated short-form videos, as well as videos the app thinks you’ll like, based on what you’ve watched before.

But while musical.ly was arguably ahead of its time (Facebook, Instagram and others now incorporate similar lip-sync capabilities), TikTok seems fresh, filling a short-form video gap left by Vine and its music-centered predecessor.

Vine co-founder Dom Hoffman said this week that he was developing a new video app, called Byte, which has been in the works for a year. While Facebook, Instagram and Twitter are focusing more on longer videos, the marketplace for new short-form video apps may be poised to take off.