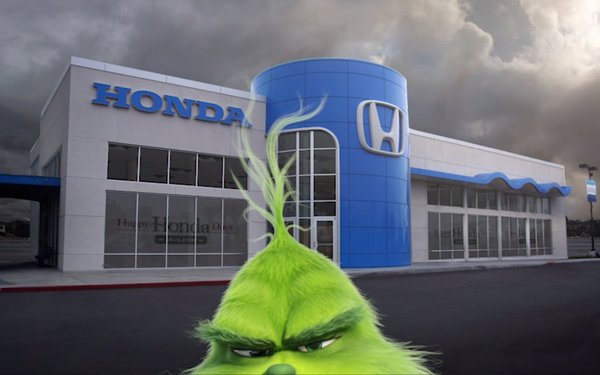 The Grinch took over Honda’s Twitter account after “canceling” its annual Happy Honda Days sale in a campaign that broke Sunday during NFL football.

Honda has partnered with Universal Pictures and Illumination’s "Dr. Seuss’ The Grinch"for its annual sales event campaign. The Grinch is also using Honda’s Instagram, Facebook, Snapchat and YouTube channels to spread word about his Twitter takeover.

The campaign, from RPA, includes a TV spot in which The Grinch cancels the sales event because it is “too happy.” All that is left behind by the grumpy character is an empty Honda dealership.

Although The Grinch is a cynical grump, perhaps the automaker can help him have a change of heart, says Susie Rossick, assistant vice president of Honda Marketing.

“The Grinch is the perfect character to communicate the spirit of the holidays and capture the attention of families as we unfold Honda’s custom holiday story over the coming days,” Rossick tells Marketing Daily.

“Honda is adding joy and irreverence to holiday advertising while tapping into people’s love of nostalgia and holiday traditions while capitalizing on an iconic holiday character. A movie integration can be a smart strategy if it aligns with your brand and audience.”

On Tuesday, the campaign extends to NBC’s "TODAY with Kathy Lee and Hoda" and on Monday and Wednesday to E!’s No. 1 Snapchat show, "The Rundown."

Earlier this month the brand launched a follow-up to its beloved 2014 Happy Honda Days nostalgic “Toys” campaign featuring a new round of classic childhood toys, including favorites such as Voltron: Defender of the Universe, Care Bears, The Six Million Dollar Man, and Teenage Mutant Ninja Turtles.

Honda’s 2018 integrated Happy Honda Days campaign features these popular toys from the 1970s, '80s and '90s as spokespeople for the Honda Clarity, CR-V, Accord, Pilot and Ridgeline in TV spots, print advertising, in-dealership collateral, throughout digital media, on radio and across social media.

“The characters featured in Honda’s 2018 holiday campaign like The Grinch and the throwback toys resonate strongly with people, making them take notice while bringing that spirit of fun to the holidays, which is what we hope Honda’s campaign does, all the while differentiating our advertising from the rest of the auto industry,” Rossick says.

Honda has conducted the “Happy Honda Days” campaign for more than 10 years, according to the automaker.