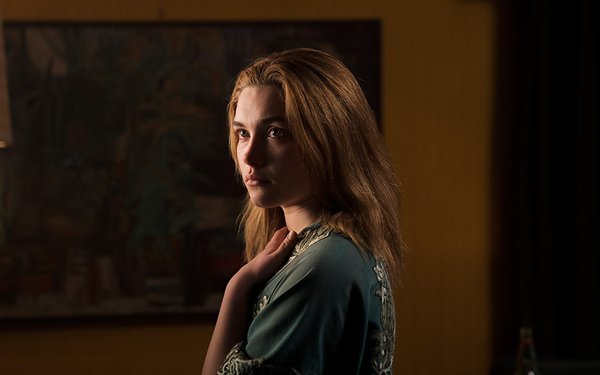 I spent the three nights leading up to Thanksgiving watching over 7½ hours of “The Little Drummer Girl,’ a six-episode mini-series on AMC.

Then I spent another two hours the night after Thanksgiving watching a 1984 movie version of the same John le Carré psychological spy novel.

Let’s first dispense with the main recommendation for the AMC series: Florence Pugh (pictured above), who shines as Charlie, a young British actress recruited by Israelis in 1979 to pretend she’s a Palestinian sympathizer. It’s part of an elaborate scheme to snare a top terrorist. But which side, if any, is Charlie really on?

For the first three-quarters or so of the new production, the mini-series length works well in conveying the scope and accuracy of a complicated novel. While motivations, character development, and personal interrelationships are glossed over in the earlier movie version, the mini-series provides the time to really get inside Charlie’s head.

But, as I understand also occurs with le Carré’s book, the complex plot in the mini-series gets pretty confusing toward the end. I found myself mystified about exactly what was going on.

However, in the more streamlined movie version, I had no problem at all following the final half-hour of the movie.

So, here’s a plan. Watch the first three-quarters of the story in the 2018 version, and the final quarter in the 1984 version. Just be ready to pretend that a miscast Diane Keaton is British, not American, and that she’s in her young 20s rather than in her mid-30s. Those two traits come naturally to Pugh — and that’s how it is in the book.

One more thing: While the 1984 version was a Hollywood movie, it’s the 2018 mini-series, co-produced by the BBC mind you, that tacks on an unnecessary Hollywood-type ending.

I’m guessing the book’s darker and more believable finale, nailed perfectly in the 34-year-old movie, would have been too much of a downer heading into AMC’s heavily promoted “Best Christmas Ever.”