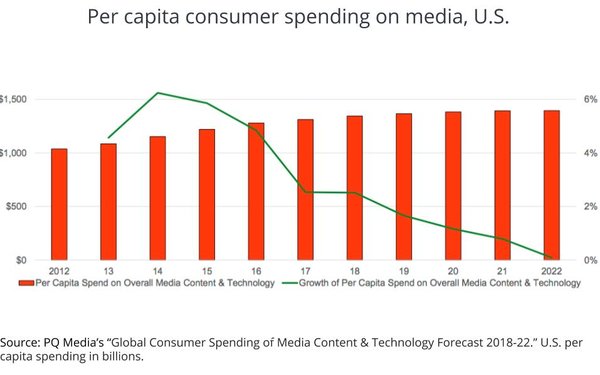 The average U.S. household now spends about $285 per month on media -- up from $278 monthly in 2017, according to a Research Intelligencer analysis of new data from media industry economists PQ Media.

The analysis is based on estimates from the just-released 2018 edition of PQ’s annual consumer media-spending report, which shows that consumer spending on media content and technology continues to outpace the ad industry’s contribution.

In the U.S., consumer spending now accounts for about 55% of the cost of media versus ad spending’s 45% -- the highest disparity since PQ Media began tracking the trend.

Much of the shift is attributed to consumers spending more on both premium content and media technology, but on a longer-term basis, PQ does see a gap between advertising and consumer spending "decelerating" as direct consumer outlays begin hitting the wall.

“Consumer spending is more hit-driven than advertising and marketing spending,” explains PQ President-CEO Patrick Quinn, adding: “For example, 2017 was a lousy year for the film industry, but it’s been gangbusters in 2018.”

“Harry Potter used to drive book sales: up the year book came out, decline the following year. Adult coloring books drove the industry in 2016, nothing in 2017, and this year in the U.S., it’s books about Trump (example: Bob Woodward’s book "Fear” broke $1 million in its first week of release).”

That said, PQ continues to see a constant rate of expansion for consumer spending on media, which is projected to approach about $300 per month per U.S. household in the next few years.

While the U.S. remains one of the highest consumer media-spending markets in the world, it was surpassed this year by Japan.

“The U.S. remained the world’s largest market for consumer media content, access and technology, generating $442.7 billion in 2018,” PQ’s new report estimates, noting: "On a per-capita basis, Japanese consumers will spend the most on consumer media, reaching $1,360.11 in 2018, replacing the U.S. as the top spending nation with an average of $1,344.55 per person. Russia will post the fastest growing of the Top 20 markets, rising 11.3% in total spending and 11.2% in per-capita spend this year, while the U.S. market will be the slowest growing, up only 3.3% and 2.5%, respectively."