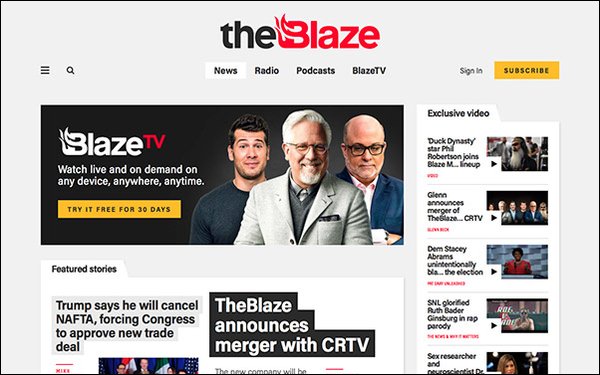 is merging with CRTV to form Blaze Media, a company that will aim to reach 165 million people via television, digital platforms and social media, according to The Hollywood Reporter, which first reported the news.

The two organizations were founded by Glenn Beck and Mark Levin, respectively.

It ranks below Fox News, Breitbart, Washington Examiner, Washington Times, Western Journal, Daily Caller and National Review, which are all in TheRighting’s list of top 20 conservative websites of the month.

Several conservative websites witnessed double-digit declines in unique visitors in October 2018, compared to the same month in 2017, according to TheRighting's analysis.

TheRighting also tracks NYTimes.com, WashingtonPost.com and CNN.com. The Times' year-over-year unique visitors rose by 4% in October 2018, The Washington Post by 1%, and CNN.com fell by 9%.

Blaze Media will be run by copresidents Tyler Cardon and Gaston Mooney, The Hollywood Reporter reports.

In August, Beck’s site suffered a sweeping round of layoffs, cutting “just over 20% of the combined workforce of Mercury Radio Arts and TheBlaze (with most of the changes happening at TheBlaze”),” he wrote in a memo at the time.