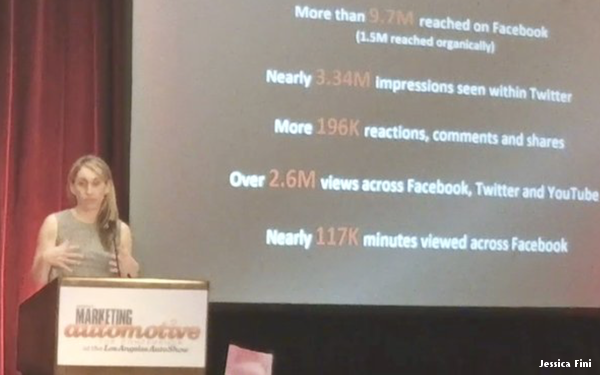 The automotive marketing experts who spoke at MediaPost’s Marketing: Automotive Los Angeles conference had a range of experience to share.

It was MediaPost’s first affiliation with the Los Angeles Auto Show after three conferences held in conjunction with the New York Auto Show. There were a total of about 160 attendees throughout the five-hour event, with about 100 in the room at any given time. Parts of the conference were recorded and can be viewed from the agenda page.

Some of the highlights included a Q&A-style keynote interview with O’Connor, who talked in depth about the variety of Infiniti marketing activities, including the Japanese Automotive Invitational it held with the assistance of Motor Trend in conjunction with the Pebble Beach Concours d’Elegance, which reached both influencers and a younger-than-typical Concours audience. It could become a staple of Pebble, he says.

“It was hugely successful,” O’Connor told the audience. “We didn’t know exactly what to make of this or what would happen. We ended up getting 8,000 people through during the weekend, so it was just packed.”

Von Sadovszky's fascinating presentation focused on Generation Z, those born between 1995 and 2009. She called them “identity shifters,” which is a nice way of saying they all seem to have a multiple personality disorder.

Another Q&A was conducted with Patrick McKenna, head of brand communications at Mini USA, who talked about the automaker’s massive nationwide road rally, Mini Takes The States.

“When you think of 4,000 people, we’re a niche brand. In broad terms it’s like 10% of your owner group out on the road,” McKenna says of the biannual program, on which the company spends about 3% of its marketing budget.

“Programmatic is fantastic -- but programmatic will never be standing in front of you kind of choked up,” he says. “It’s nice to have this human element when you get into this part of experiential marketing.”

In another presentation, Jessica Fini, manager of social marketing for Honda and Acura, presented a case study on how the brands use augmented reality, virtual reality and mixed reality (MR).