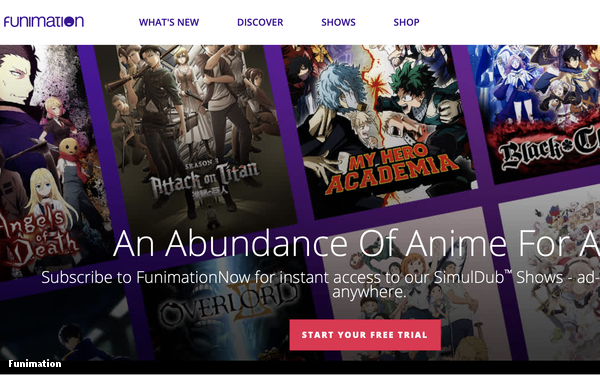 Hulu has signed a deal with the Sony Pictures Television-owned anime distributor Funimation, adding thousands of hours of content to the streaming service’s library.

The deal gives Hulu the right to dozens of new series every year, starting in 2019, with subtitled day and date releases tied to the episodes debuting in Japan. It also includes access to Funimation’s anime library, more than 10,000 hours of programming, both subtitled and dubbed.

Shows in the deal include “My Hero Academia,” “Attack on Titan” and “Tokyo Ghoul.”

Hulu and Funimation have been partners for a number of years, though previous deals only covered a portion of the Funimation library. Funimation ended another agreement it had with WarnerMedia-owned CrunchyRoll in October.

Terms of the deal between Funimation and Hulu were not disclosed.

Anime has become a key genre for Hulu, which also has U.S. streaming rights to popular shows like “Naruto Shippuden” and “Sailor Moon.” The company says it is “committed to expanding and curating its library” of anime content.

Anime is a genre table to drive niche streaming services, however ownership or long-term deals are clear necessities, as the CrunchyRoll deal cancellation illustrates.

Funimation has a niche streaming offering of its own with the same anime programming, but by selling its programming to Hulu, it can hedge against its own inventory, giving anime lovers a more mainstream option to view its content.