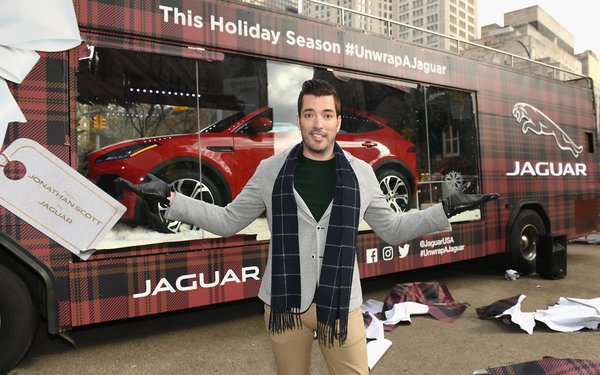 Jaguar partnered with HGTV’s Jonathan Scott to create the first-ever mobile holiday window in a hollowed out two-story bus featuring a Jaguar E-Pace.

The window was unveiled Dec. 11 in New York and will be on display until Dec. 23. It will travel throughout New York shopping areas, including Gramercy Park, Rockefeller Center, Park Avenue and Fifth Avenue.

Both the mobile holiday window interior and tartan wrap on the exterior were designed by Scott, who co-hosts HGTV’s “Property Brothers.” He explains the inspiration behind the window in this behind-the-scenes video.

The interior of the holiday window features a red Jaguar E-Pace surrounded by a snowy scene complete with Christmas trees with ornaments, fairy lights, holiday garlands, wreaths and gifts. The exterior features a custom tartan wrap reminiscent of the ribbons around the presents from Scott’s childhood.

As part of its holiday campaign, Jaguar is kicking off a nationwide #UnwrapaJaguar sweepstakes with the grand prize a 2019 Jaguar E-PACE SE.

The automaker also created an industry-first partnership with Pinterest where, from Dec. 12 and through Jan. 2, users will be able to digitally unwrap interactive pins featuring 360 degree-views of the Jaguar E-Pace inside the holiday window and also engage with interactive hotspots within the window to explore additional vehicle features. The campaign is supported with paid social support behind the brand’s channels.

“We love how Jonathan worked creatively within the small interior of the bus to showcase the Jaguar E-Pace while keeping the space warm and inviting,” Stuart Schorr, vice president, communications, for Jaguar Land Rover North America, tells Marketing Daily.
“He did a great job of including plenty of holiday décor around the vehicle without overcrowding the space.”

“We’re encouraging consumers who spot the bus in New York City to snap a pic and share with #UnwrapaJaguar,” Schorr says.

This is Jaguar’s first holiday sweepstakes.

"We really wanted to bring the holiday spirit and the spirit of the #UnwrapaJaguar mobile holiday window to consumers in NYC, but also across the country,” Schorr says.