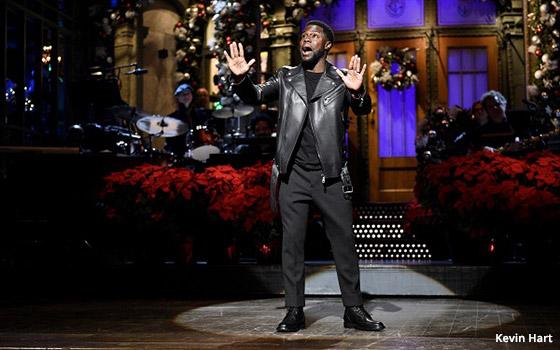 What do the chief of staff in Donald Trump’s White House and the host of the Oscars have in common? They are both jobs nobody seems to want.

Happily, there is a TV Blog angle for both of them. In the case of Trump’s chief of staff, one can imagine the president mounting an effort modeled on “The Celebrity Apprentice” for filling this job vacancy.

After 12 weeks of interviews, weekly challenges and boardroom histrionics, the president's choice might conceivably come down to two finalists: Dennis Rodman and Gary Busey -- either of whom feels wholly appropriate.

As for the Academy Awards, Kevin Hart's appointment as host of the Oscars (scheduled for February 24 and broadcast on ABC, as always) lasted all of two days earlier this month.

As happens frequently these days in the era of regrettable social media postings and statements made in the act of performing stand-up comedy, Hart was no sooner announced as Oscar host than tweets he posted in 2011 suddenly surfaced in which he made comments that offended gay people.

The usual dust-up occurred, and the august Academy of Motion Picture Arts and Sciences found itself in hot water, and Hart withdrew.

And now, this annual hosting gig -- which for decades gave international exposure to the entertainment personality (traditionally, but not always, a comedian) who was lucky enough to be chosen for it -- has now turned into a pariah position that only a nut would agree to take on.

Top comedians might not even remember what they may have said, done or tweeted sometime in the last quarter century that might now incur the wrath of the Twitter police. But if there is anything waiting to be unearthed, they can be sure someone will find it.

The message or lesson here ought to be that celebrities (or anyone else), who prefer that their innermost thoughts about gay people or any other kinds of persons remain private, should resist the temptation to post them in public forums on the Internet.

It should be obvious to everyone by now that the Internet is the permanent record of your life that your parents and teachers once warned you about when they would say things like: “If you get C's or D's on your report card, they will become part of your permanent record!”

In the pre-Internet Era, that permanent record actually did not exist. But today, the Internet is that permanent record. Nothing ever seems to get expunged, even if policing and deleting one's tweets, for example, is easy to do. Few people seem to go back and do this, however.

Kevin Hart evidently thought nothing bad would ever arise from tweets he posted seven years ago (if he bothered to think about it at all). He should have known better, and so should everybody else -- be they celebrities or civilians.

In the wake of this Oscar-hosting fiasco, commentators are now jumping all over the Oscars once again -- blasting this annual televised awards show and its organizers as insensitive, obsolete, clueless and irrelevant.

Basically, some of the criticism seems rooted in the charge that the Academy does not do a thorough enough job (or any job) in combing through the social media histories of the entertainment personalities it considers for the annual host's job.

Or at the very least, they did not do so in the case of Kevin Hart. So now, this is to be part of the process of choosing an Oscar host -- performing a thorough social media search.

Well, maybe the Oscars are irrelevant and clueless. Haven't they always been thus? Sure they have -- but that never stops millions of us from watching them every year or E! from airing eight hours of pre-Oscar programming on Academy Awards day.

Whoever winds up hosting the show, he or she or they (if another pair is hired such as the duo of Anne Hathaway and James Franco in 2011) will be lambasted for whatever they do. It is a thankless job.

Everyone will complain about the telecast, even while watching the whole thing from beginning to end. Because in the final analysis, what else are you going to do on a gloomy Sunday night near the end of February?