'Secret Life Of The Zoo' Is The Nicest Show On Television 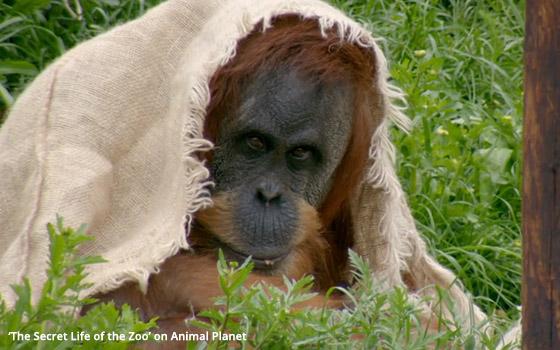 Animals are people too.

That seems to be the principal message embedded in “The Secret Life of the Zoo,” a joyous series from England that is now seen every Thursday night in two back-to-back episodes on Animal Planet.

“The Secret Life of the Zoo” is such a nice, pleasant, relaxing and entertaining show that in the context of television, it qualifies as an endangered species.

Most of television is unpleasant, not nice and decidedly un-relaxing (even if, for some, these negative traits still qualify as entertainment).

This zoo-animal series is unabashedly manipulative, but complaining about a show that is this much fun to watch would be like coming out against puppies.

“The Secret Life of the Zoo” has been seen on U.K. TV since 2016. To my knowledge, it only recently turned up on Animal Planet this fall.

This could not be confirmed on the network's proprietary Web site that is set up for journalists to collect information about Animal Planet's shows since the site has no content about this show -- which is odd, since it is the network's best show currently.

Filmed at a zoo specializing in endangered species in Chester, England, the show features a cast of (mostly) youthful zookeepers and a veterinarian or two who care for a diverse menagerie of animals -- orangutans, snakes, turtles, penguins, bears, otters and more.

The animal groups are all portrayed in ways that are designed to make them seem human, or more to the point, help humans who might watch this show relate to them.

All of the animals have human names, and within their various groups, families and familial relationships are always carefully emphasized.

This show is very well-produced -- from the editing to the background music. Producers seem to have a keen eye for visual details that emerge from the many hours (presumably) of footage they capture.

The details serve to humanize the animals -- especially when coupled with narration that insists that, say, a turtle being shown onscreen is feeling disappointed about some aspect of his life, and a close-up of his face is shown in which he seems to be sad.

Do turtles really feel this way? I have no idea. You get the feeling a turtle doesn't really “feel” emotions in this way, but who knows? It is great fun to believe in it anyway.

The show has a playfulness, but also a candor that is admirable. Because these animals are in captivity and not in their natural habitats (where they are practically extinct), they are susceptible to various illnesses and maladies.

And some of them die on the show. This represents an unusually high degree of honesty for a TV show. Most shows would likely avoid the subject of death-in-captivity. Here, however, the issue is dealt with candidly.

Great care has been taken to choose the music that accompanies different scenes and scenarios in “The Secret Life of the Zoo.” The music is at times comedic, reflecting scenes in which the animals are at play, and at other times romantic, when some of the animals are feeling amorous.

On this latter subject, scenes of reproductive behaviors among various species are shown without censorship. Parents tempted to invite their younger children to watch this show should be aware of this.