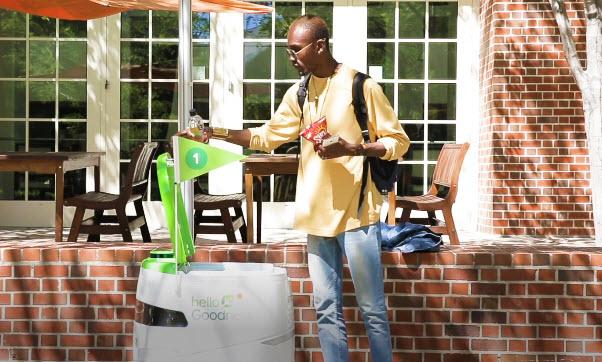 PepsiCo is testing the use of vending robots to deliver its Hello Goodness snacks portfolio to students across the campus of the University of the Pacific in Stockton, Calif.

The company says it’s the first major food or beverage maker in the United States to put order/delivery robots in action.

Between 9 a.m. and 5 p.m., students can use a smartphone app (available for iOS to those with a University of the Pacific email address) to place and pay for an order, then meet up with one of the snackbots at a nearby destination to collect the goods.

The bots can travel more than 20 miles on a single charge, have all-wheel drive capabilities for handling curbs and steep hills, and have a camera and headlights that allow for navigating in full darkness or rain, according to PepsiCo.

The bots are an extension of PepsiCo’s Hello Goodness stationary vending machines, which had more than 40,000 U.S. installations as of September 2018. PepsiCo says it plans to use “new formats, locations and experiences” to establish more than 50,000 Hello Goodness “touchpoints” by the end of this year.

PepsiCo was the first major player to group existing snack products that meet specific nutritional criteria under a branded umbrella and sell them in vending machines.

And Hello Goodness has proven one of PepsiCo’s more successful initiatives aimed at tapping the lucrative “better for you” snacks market, a primary focus for the company under former CEO Indra Nooyi.

PepsiCo has reported that since the Hello Goodness machines rolled out in December 2015, they have driven sizable sales volumes, at premium prices, across locations, with high repeat-purchase levels.

Studies have also shown that adding a Hello Goodness machine has upped vending banks’ sales by anywhere from 12% to 59%, reported CNBC. In fact, PepsiCo has said that Hello Goodness is revitalizing both its own vending business, and the business as a whole.

In addition to vending machines and now robots, last March, PepsiCo added Hello Goodness to its ecommerce business, which has grown to more than $1 billion in revenue.

Hello Goodness tests on Amazon have produced sales and ROI results significantly exceeding those of traditional ad campaigns, according to PepsiCo, which is using Amazon to test and hone ecommerce offerings, according to CNBC.
beverages, food, innovation
Next story loading