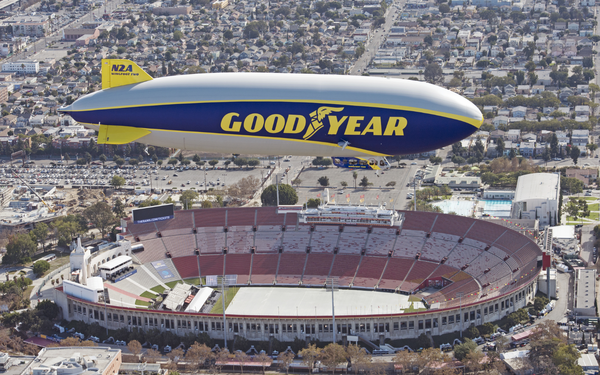 The Goodyear Blimp will be named an honorary member of the National Football Foundation’s College Football Hall of Fame today.

The iconic airship is the first non-player or coach to join the exclusive group of football greats.

The blimp will be inducted for revolutionizing the way fans experience the game, according to the company. Since making its debut at the 1955 Rose Bowl, Goodyear airships have covered more than 2,000 college football games, offering their unique perspective of the action on the ground. The blimp was also the first to provide high-definition live video for a national sports game.

That innovation intended to enhance the players and fans’ experience continues with a BlimpCast today when ESPN will conduct a live production of the 2019 College Football Playoff National Championship from inside the Goodyear Blimp airing on ESPN3 and the ESPN App as part of ESPN’s MegaCast presentation.

“College players and fans know that when the Goodyear Blimp shows up, it’s a big game,” said Archie Manning, National Football Foundation chairman, in a release. “Its presence is intrinsically known and tied to the traditions that make college football so great.”

Fans will be able to experience the blimp’s history in college football with a new exhibit set to open later this year at the Chick-fil-A College Football Hall of Fame in Atlanta. The exhibit will showcase historical blimp artifacts, video footage and photos.

“The College Football Hall of Fame honorary induction helps to validate the blimp’s legacy in the sport and gives us an exciting platform to tell the blimp’s narrative to a new generation of college football fans,” Macsuga tells Marketing Daily.