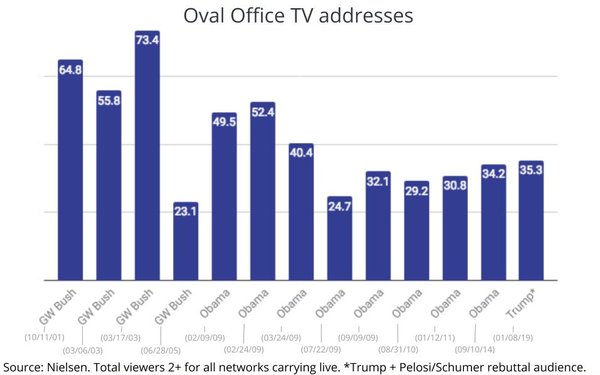 The President’s prime-time Oval Office address and a rebuttal by the Democratic Congressional leadership Tuesday night was the highest-rated in a decade, according to estimates provided to Television News Daily by Nielsen.

Combined common coverage for the two addresses delivered 35.3 million viewers two years or older. Nielsen did not break out ratings separately for the two addresses, which were covered by more than 11 national television networks, but a number of publications citing “preliminary” ratings reported that the Democratic response actually delivered more viewers than the President’s Oval Office address.

The audience was the highest for any Oval Office address -- which are usually reserved for national emergencies -- since President Barack Obama’s March 24, 2009 address on the U.S. economic recovery following the 2008 financial crisis.

The highest prime-time audience for any post-9/11 address was 73.4 million viewers 2+ who tuned in to watch George W. Bush’s March 17, 2003 “ultimatum” to Saddam Hussein, which preceded the U.S. invasion of Iraq.